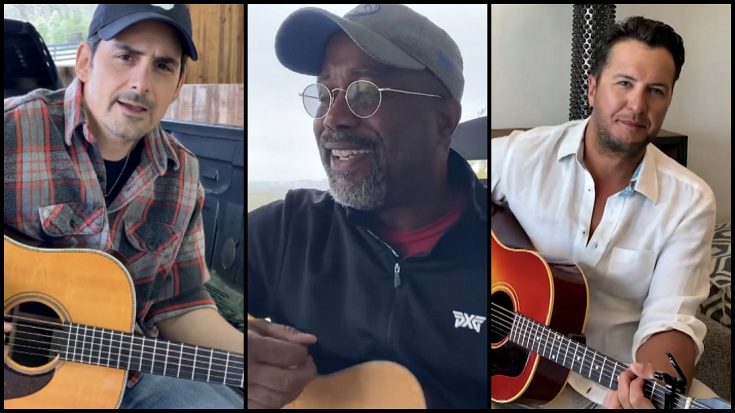 Sunday, April 5, was supposed to be the night that country music took over Las Vegas. The ACM Awards were supposed to take place with Keith Urban serving as host for the very first time.

He does it all! @keithurban will take the #ACMawards stage to host AND PERFORM at this year's show! The party starts LIVE April 5 at 8/7c on CBS.

But, because of the coronavirus pandemic, the awards show was postponed to Wednesday, September 16, with a location to be determined.

Mark your calendars! The 55th ACM Awards will now air live on Wednesday, Sept. 16, at 8/7C on the CBS Television Network. #ACMawards

Country fans, especially the ones who watch the show from home, were disappointed to know that there wouldn’t be a show to watch come April 5, but the Academy of Country Music quickly came up with an alternate plan. They put together a TV special called ACM Presents: Our Country, which aired in place of the ACM Awards on Sunday, April 5.

The TV special, hosted by Gayle King, featured many country artists performing acoustically from their own homes, along with “clips of top moments from the Academy’s 55-year history.”

It will be a concert like no other. Get ready for ACM Presents: Our Country Sunday, April 5 at 8/7c on CBS. #ACMOurCountry

Posted by ACM – Academy of Country Music on Wednesday, April 1, 2020

One of the performances, and quite possibly the most-talked about performance of the night, was the incredible tribute to Kenny Rogers, who passed away at the age of 81 on March 20.

Not only was Rogers considered a country legend, he is also a seven-time ACM Award winner. Check out the list below of his ACM Awards.

Because Rogers released so many legendary songs, Our Country decided to choose not one, not two, but three songs to pay tribute to him. Brad Paisley and Darius Rucker teamed up – virtually – to sing “Lucille” and “The Gambler,” while Luke Bryan performed Rogers’ 1979 #1 song, “Coward of the County.”

Rucker and Paisley FaceTimed each other on their computers to perform the duet and although that may seem difficult, it went off without a hitch!

Bryan followed up with an acoustic performance from his home. After his song, Bryan expressed his love for Kenny Rogers saying, “We love you, Kenny! Thank you so much for all your musical contributions. We love you, buddy.”

Watch their tribute to the man who paved the way for so many below.