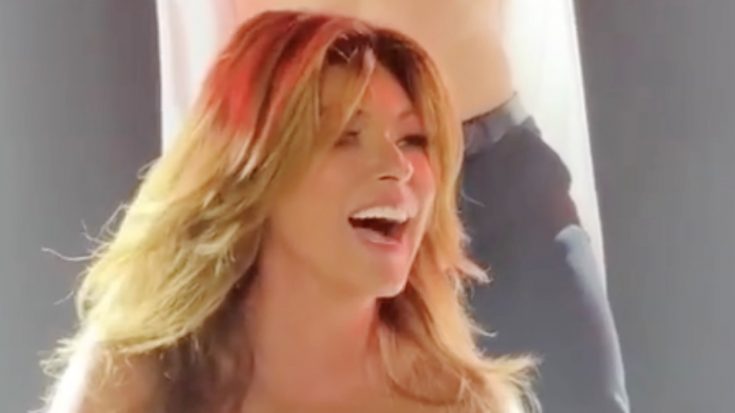 In a surprising announcement, the Queen of Country Pop is heading across the pond for a new (to her) gig! Shania Twain is currently performing at her Las Vegas residency, but she will soon be heading to the UK to be a judge on the hit ITV show Starstruck.

The show’s official website explains the show’s format as the following: “Superfans shed their normal personas and transform into their idols in this talent show hosted by Olly Murs. Who has what it takes to wow the judges.”

Contestants show up on the stage in their street wear, but then are taken by the show’s glam team to turn into singers like Tina Turner, Elton John, Barbra Streisand, and more. After they are transformed, they give a performance for the four judges: Adam Lambert, Beverly Knight, Jason Manford, and Sheridan Smith.

The show’s first series (what they call “seasons” across the pond) was such a success that the show is coming back for Series 2!

In a social media post on August 30th, Starstruck revealed that a new judge would be joining their panel – Shania Twain! She will be replacing beloved judge Sheridan Smith, an actress, singer, and TV personality who has been on countless TV shows in the UK.

Up & at ‘em ready for a busy day’s work.Happy weekend everyone!? pic.twitter.com/H5zXpWA9dI

‘We are over the moon to welcome music legend Shania Twain to our fantastic Starstruck panel,’ said Cat Lawson, creative director. “She is an absolute trailblazer who has collaborated with everyone from Elton John to Harry Styles. Shania will bring so much fun to our Saturday nights we simply cannot wait.”

Metro.co.uk reached out to ITV to find out why Sheridan did not return, and a spokesperson said, “We would have loved Sheridan to have returned to the show but she has sadly had to decline due to scheduling conflicts with a new acting project.”