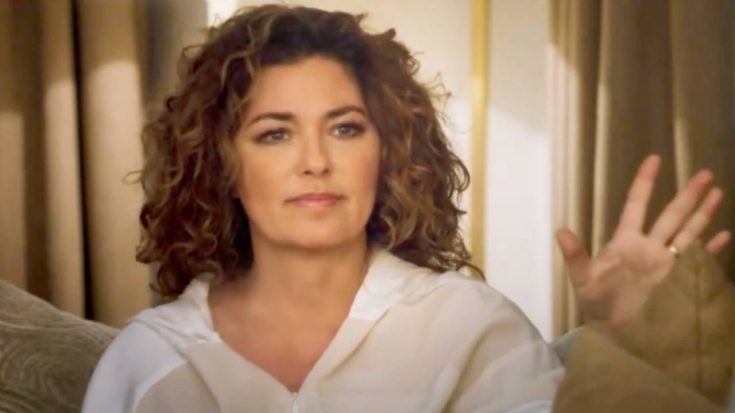 Shania Twain is so famous and so bubbly on stage, you’d never think she has had tragic, sad, or traumatic experiences. To us, she’s the one who gets the party started with just three words: “Let’s go, girls.”

Twain is pretty much the face of female empowerment with songs like “Man! I Feel Like A Woman,” and her new Netflix documentary is called Shania Twain: Not Just a Girl. A new interview revealed that she did all this because she was “terrified” to be a girl growing up.

The singer recently did an interview with The Sunday Times about being physically and sexually abused as a child by her stepfather, Jerry Twain.

“I hid myself and I would flatten my boobs. I would wear bras that were too small for me, and I’d wear two, play it down until there was nothing girl about me,” she said. “[I would] make it easier to go unnoticed. Because, oh my gosh, it was terrible – you didn’t want to be a girl in my house.”

Twain, her sisters, and even her mother were abused by her stepfather, who adopted Shania and her sisters at a young age. The “You’re Still The One” singer revealed that she thought Jerry would kill her or her mother. And that one time, she threw a chair at him.

“I think a lot of that was anger, not courage. And it took a long time to manage that anger. You don’t want to be somebody that attacks me on the street because I will f—ing rip your head off if I get the chance,” she said.

Shania’s mom started taking her to bars to perform when she was just 8 years old and when she went through puberty and became a woman, she still wanted to hide her body.

“But then you go into society and you’re a girl and you’re getting the normal other unpleasant stuff too, and that reinforces [covering yourself up]. So then you think, ‘Oh, I guess it’s just s—ty to be a girl. Oh, it’s so s—ty to have boobs.’ I was ashamed of being a girl,” she revealed.

Her parents died in a car accident when she was 22 and she had to help raise her younger siblings.

“All of a sudden it was like, well, what’s your problem? You know, you’re a woman and you have this beautiful body? What was so natural for other people was so scary for me. I felt exploited, but I didn’t have a choice now. I had to play the glamorous singer, had to wear my femininity more openly or more freely. And work out how I’m not gonna get groped, or raped by someone’s eyes, you know, and feel so degraded.”

Her story proves that you really don’t know what any one has been through. Thank you Shania, for being so strong and sharing your story.