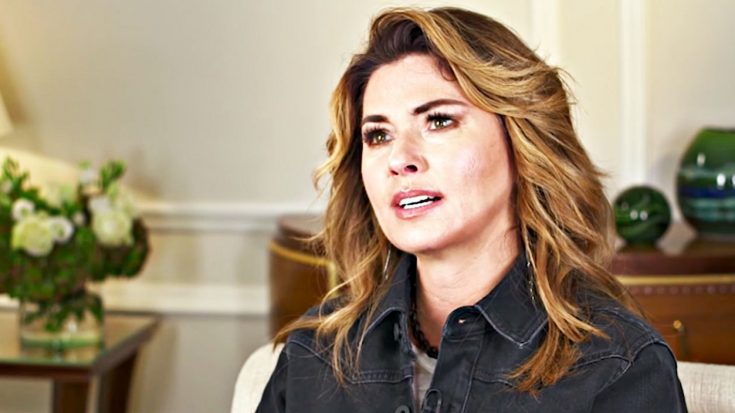 A worldwide country-pop star, Shania Twain was at the absolute height of her career when tragedy struck and she lost her voice. Damage to her nervous system and vocal cords had robbed her of her biggest joy – singing.

Now, Shania is opening up about some of the difficult obstacles she faced when she suddenly was without a voice – something she had never imagined her life without.

In a new interview, Twain gets choked up fighting back tears as she opens up about mourning the loss of her greatest pleasure in life: singing.

“I started having problems with controlling my voice,” Twain confessed, saying she had been cleared of major effects from contracting Lyme disease. “I figured it was just fatigue. I was ending this very long tour, I had a young toddler, and I had been overworked for many years…I just figured I needed a break.”

“But the break got extended,” she continued, pausing to hold back tears. “Because my voice never came back.”

At this point, Twain was having issues with her speaking voice, couldn’t sing at all, and looked the death of her career square in the eyes. Grieving the loss of her ability to sing, she believed for years that she wouldn’t ever be able to return to the stage.

“It was devastating,” Shania told Willie Geist in his March 2020 Sunday Today interview. “I was very, very sad about it to the point where I just — I felt I had no other choice but to accept it — and that I would never sing again.”

She added that she was “mourning” the expression of her voice, that the rapid change from being able to sing and perform to being robbed of that joy caused a deep sense of loss and grief.

Eventually, she overcame the problems with her voice and got help from doctors and surgeons who worked with her to repair the damage and heal her body.

“It was little by little because the surgery is invasive,” Twain replies, noting that while her voice will never be the same as it was before, she’s learned to embrace the changes. “It’s given me more room to play, to be honest,” she adds, noting that she’s also a fan of the new gravely tone to her voice. “I think it’s kind of sexy.”

“I’m never gonna have my own voice again — I’m okay with that. I’ve found a new voice and I like it.”