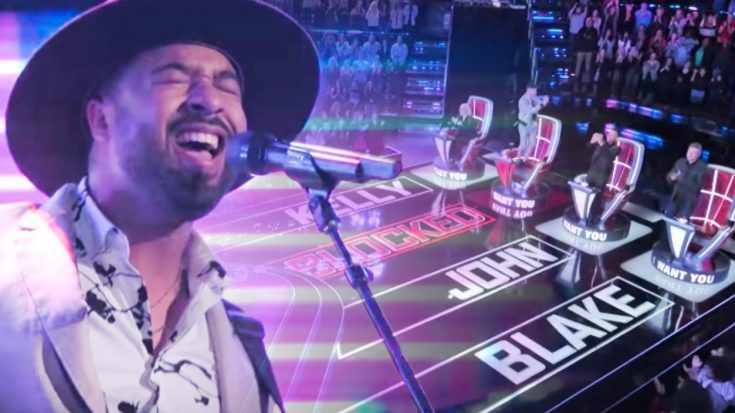 Every season of The Voice, the show releases at least one audition before the premiere date to show us how good the talent will be. And the 18th season was no different.

One voice is all it takes. ? #TheVoice returns Monday, February 24.

While we knew that there would be a different dynamic with a brand-new coach in the mix, we didn’t know that meant bigger and better talent than before. Pop singer Nick Jonas joined Blake Shelton, Kelly Clarkson, and John Legend for Season 18 of The Voice.

To get us ready for the season, The Voice quietly released a Blind Audition that will make even viewers want to turn their chairs for him. Nelson Cade III stepped on stage and performed Stevie Ray Vaughan’s “Pride and Joy.”

Just 11 words in, John Legend slammed his buzzer followed by Kelly Clarkson not long after. His gravelly, soulful voice was irresistible to them. Once he got the the last line of the first verse, Jonas went to turn around but came up disappointed when he realized one of the other coaches had blocked him!

Eventually Shelton also turned, but Legend – who blocked Jonas – didn’t seem too phased by the extra competition, even singing along to Cade’s performance.

When he finished the song, each coach pleaded for Cade to join their team – except for Jonas of course.

He ended up choosing John Legend as his coach!