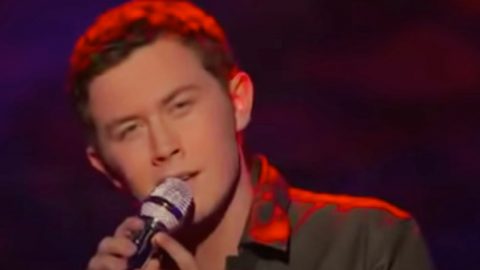 Scotty McCreery was only 17 years old when his life changed forever. At that young age, McCreery shot to instant stardom after he was crowned the champion on the tenth season of American Idol.

During his time on the show, McCreery became known for delivering one swoon-worthy country hit after the next. One of the performances that helped him win over fans was his rendition of a beloved George Strait hit, “I Cross My Heart.”

Released in 1992, “I Cross My Heart” was Strait’s lead single off of the Pure Country soundtrack. The song quickly romanced its way up the charts, claiming the top spot in both the U.S. and Canada.

To this day, “I Cross My Heart” is continuously referenced as one of the best love songs in country music history. The popularity of the song led to the immense success of the Pure Country album, which is the best-selling record of Strait’s career.

As a country boy born and raised, McCreery certainly grew up listening to “I Cross My Heart” and Strait’s other hits. His strong familiarity with the song allowed him to put forth a passionate performance when he sang it during his time on American Idol.

McCreery added further emotion to the heart-tugging lyrics with his genuine ability to connect to the song. The addition of his deep, powerful voice sealed the deal, and resulted in a performance that left the audience mesmerized.

You’re also sure to be captivated by McCreery’s performance once you watch it in the video below. It’s really no surprise why he won American Idol!