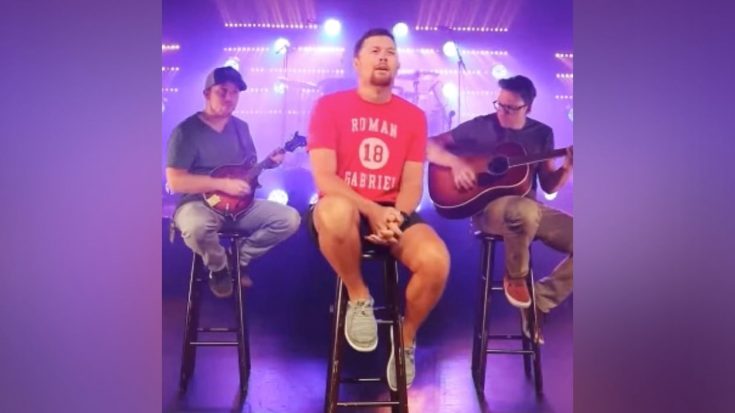 Scotty McCreery has been covering George Strait‘s songs for years. He famously sang “I Cross My Heart” on American Idol, and knocked his rendition out the park.

McCreery went on to win Idol that season.

McCreery has continued to pay his respects to Strait in the years that have passed since his Idol win. His #1 single, “Damn Strait,” is an ode to “The King of Country.”

The song mentions several of Strait’s iconic hits, including “Nobody in His Right Mind Would’ve Left Her” and “Blue Clear Sky.”

Strait saw McCreery’s music video for the song, and offered him a shoutout. McCreery was touched by the gesture. “Glad you like it, George!” he wrote in response.

Since releasing “Damn Strait,” McCreery has continued to honor Strait by singing his songs. He shared a video of himself singing Strait’s “Troubadour” on April 30.

A few weeks later, McCreery posted a video that shows him delivering an acoustic cover of another one of Strait’s hits. This time he opted to sing Strait’s #1 song from 1997, “Carrying Your Love with Me.”

McCreery just shared a short clip of his cover performance, but it’s enough for you to hear how good he is at singing Strait’s music! Check it out below.

Which one of Strait’s songs would you like to hear McCreery sing next?