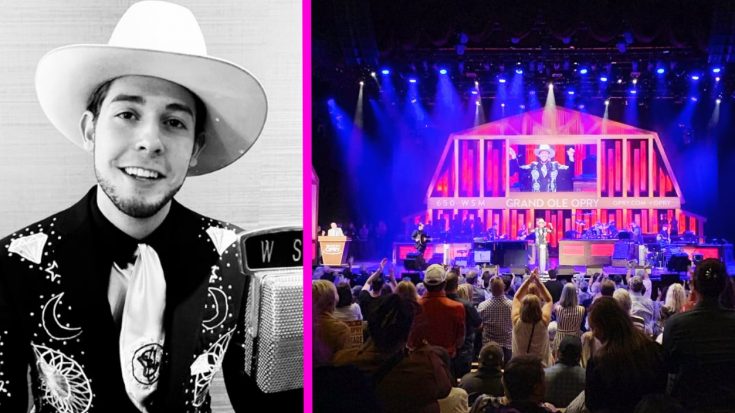 None of Hank Jr.’s kids ever got to meet their grandfather, but all have grown up with a respect for him and the music he created. In 2018, Sam released a music video for a song titled “The Lost Grandchild’s Plea,” which has him speaking to his grandparents, Hank and Audrey.

“I definitely have always reached for the stars like Hank,” Sam told The Boot. “You get the good and all the bad; it’s genetics. So, I got a voice, a perspective, as well as a long line of demons to fight. Luckily, I have some people watching over me.“

Over the summer, Sam released a new single, titled “Gemini.” The track has the young Williams singing about finding a balance between what is right and what is wrong in life.

Sam co-wrote the song with Jaida Dreyer, who won the debut season of Real Country.

More recently, Sam collaborated with “Burning House” singer Cam during a live performance. The two sang Dolly Parton‘s classic song “Jolene,” but before that, Sam received the invitation of a lifetime.

Cam welcomed Sam out on stage, and said the Grand Ole Opry got in touch with her and wanted her to ask him a question. She wondered what he was doing on October 9th, because the Opry wanted him to play there that night and make his Opry debut!

Of course Sam agreed to the performance, and he hit the Opry stage for the first time on October 9, as planned.

Before walking out on stage, Sam went back into one of the dressing rooms and put on his grandpa Hank’s hat for the first time. The powerful moment was one that Sam shared on his Instagram Story.

With a family legacy as strong as his, Sam surely felt some pressure as he took to the Opry stage and shared his songs. But the audience accepted him right away, and fell in love with him for being Sam, not for being Hank Williams’ grandson or Hank Jr.’s son.

By the time Sam finished his performance, the entire Opry crowd was on its feet, rewarding him with a standing ovation. The powerful moment was captured in a series of pictures, which Sam shared on Instagram in celebration.

“THE CIRCLE IS UNBROKEN!
I will never forget this day, thank you for the open arms @opry
Call me “Standing O Sambo,” he wrote.

THE CIRCLE IS UNBROKEN! I will never forget this day, thank you for the open arms @opry Call me “Standing O Sambo” ❤️

While the Opry hasn’t released any videos of Sam’s debut performance yet, we have another one of his live performances for you to enjoy below. In it, he’s singing the song “Weatherman” on Today In Nashville.

Congratulations to Sam on his Opry debut! We can’t wait to see what the future has in store for him.