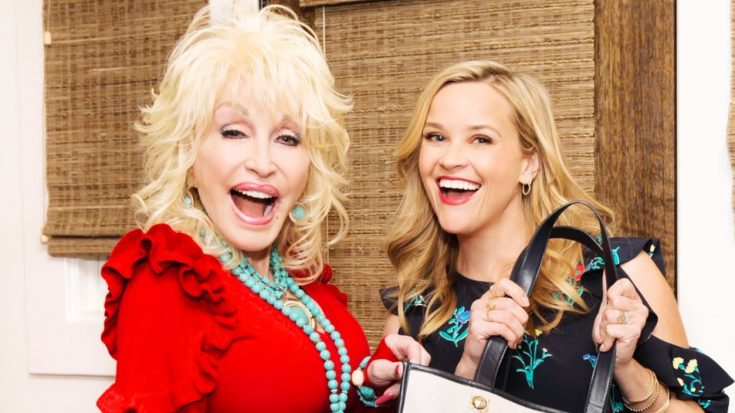 Dolly Parton has been in her fair share of movies over the years, and has even had a couple of films made about her life!

Those movies were Coat of Many Colors and Christmas of Many Colors: Circle of Love. The films told tales from Parton’s childhood, so she was portrayed by young actress Alyvia Alyn Lind.

But while other superstar country singers such as Johnny Cash and Loretta Lynn have been given the full biopic treatment, Parton has not. At least, not yet.

While speaking to Elle for its 2019 Woman in Hollywood issue, Parton neither confirmed nor denied that a movie about her life is in the works. When she was asked who she’d like to see play her in a biopic, she sneakily answered, “That depends on when I get it done.”

Parton said that in the past, she thought of two people that could portray her in a film: Reese Witherspoon and Scarlett Johansson.

Both Witherspoon and Johansson have experience playing historical figures. Johansson played the subject of the famous “Girl with a Pearl earring” painting as well as Mary Boleyn. As for Witherspoon, she famously portrayed June Carter Cash in the Johnny Cash biopic, Walk the Line.

Witherspoon would be an especially fitting choice for the role, considering the fact that she and Parton are friends. Their close relationship could lead to Witherspoon having a deeper understanding of how to play Parton on the big screen.

Happiest bday Dolly!! ???? "If you don't like the road you are walking, start paving another one." – @DollyParton pic.twitter.com/kZlilIrJRx

So far all this talk is nothing more than talk, so don’t expect to see a Parton biopic any time soon. But when the film does start rolling, we’re interested to see if Witherspoon or Johansson will be cast, or if someone else will end up playing Parton!

What do y’all think? Do you have any actresses in mind that could play Parton?

If the biopic doesn’t happen for many more years, maybe they can just get Lind to reprise her role. She already does such a good job at playing little Dolly!