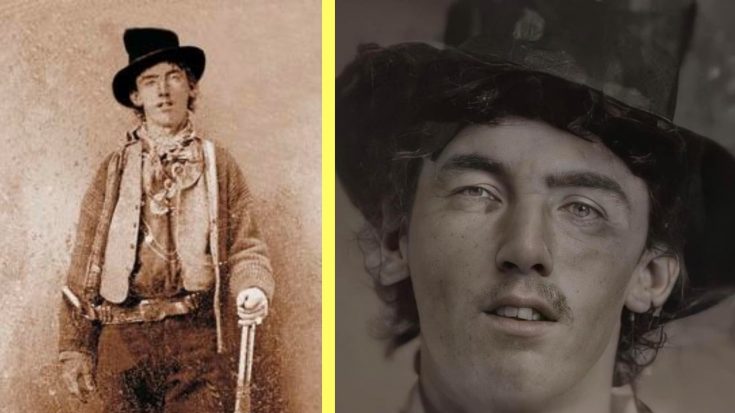 First arrested at age 16, Billy the Kid had a laundry list of offenses that followed him as he traveled through the Old West. That was until Billy was shot and killed by Sherrif Pat Garrett – at just 21 years old.

A museum in Hico, Texas that is dedicated to the history of this American outlaw asserts that a local man who was known as “Brushy” Bill Roberts claimed he was actually Billy the Kid – and he lived in Hico until 1950 when he died of a heart attack while headed to the post office.

This means that Brushy Bill lived 69 years longer than the person who was buried and assumed to be Billy the Kid.

A post shared by Kaitlyn | The Active Historian (@the_active_historian)

Officially, the end of Billy’s life came about when Sheriff Pat Garrett shot and killed him near Fort Sumner, New Mexico….but that’s where the tale starts to get fuzzy.

The director of Hico’s Billy the Kid Museum, Sue Land, says there is a record in the New Mexico Marshall’s office that proves Bushy Bill may really have been Billy the Kid.

“When the deputy United States Marshal that was with Pat Garrett at the time rolled the body over, he looked up at Pat Garrett. It’s recorded in the Marshal’s office in New Mexico that he told Pat Garrett ‘You’ve killed the wrong man,'” she told Wide Open Country.

Apparently, Garrett had shot at Billy in the dark and many believe he killed the wrong man. The dead body who was declared to be Billy the Kid had a full beard…yet known records of Billy at the time state he barely had scruff on his face.

Sue Land tells the publication that Garrett “was going to bury Billy the Kid and that’s what he did” noting that Garrett was unwilling to admit that he may have shot the wrong man.

Where the story starts to get even more interesting is at the point which a former known associate of Billy the Kid hired a probate investigator. The associate, Joe Hines, told the investigator that Billy was not dead and had been living in Texas. That’s when the investigator, William Morrison, headed to meet up with this Brushy Bill person.

According to Land, in order to convince the investigator that he was Billy the Kid and in hopes of receiving a pardon allegedly promised by Governor Lew Wallace, the two set about comparing Brushy’s scars to the known marks of Billy the Kid.

Apparently, Brushy had five bullet scars that were in the exact spots where Billy the Kid had been shot.

In spite of this evidence, there are many who still do not believe Brushy was actually Billy the Kid. Even Brushy’s family bible goes against his claims as it lists his birth year as 1879 – which means that he would have been just two years old when Billy the Kid was killed.

There have been attempts to perform modern DNA testing on the bodies of Billy the Kid, his mother, and Brushy Bill – but both Billy the Kid and his mother’s graves are unable to be located due to a massive flood causing erosion and sweeping away grave markers.

So, it remains a mystery for many of what really happened to Billy the Kid. And if Brushy Bill was telling the truth.