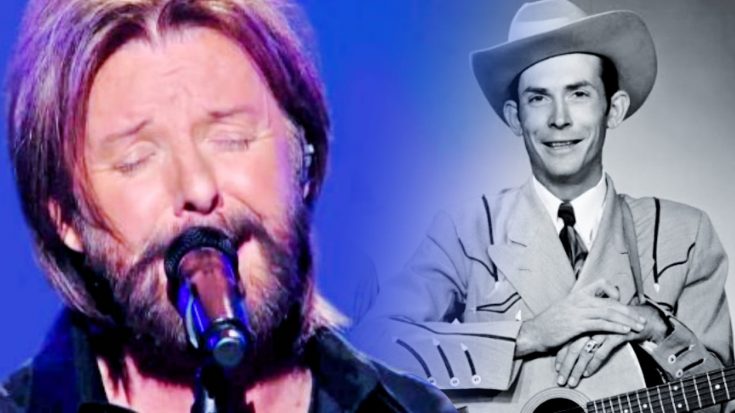 Ronnie Dunn‘s fourth solo album is finally here, and this one pays tribute to the artists and songs that have influenced him.

The album, titled Re-Dunn, is comprised of 24 rock and country covers. Dunn covers everyone from George Strait to Tom Petty, offering up his renditions of songs such as “Amarillo by Morning” and “I Won’t Back Down.”

Dunn also took the time to honor the man who is arguably the most iconic figure in all of country music history…Hank Williams.

For Re-Dunn, Dunn decided to cover Williams’ Top 10 hit from 1951, “I Can’t Help It (If I’m Still In Love With You).” Williams wrote the song himself, and it went on the claim the second spot on the Hot Country Singles chart.

It’s a song that has long been admired by country artists. In fact, George Jones went so far as to recite its lyrics in his autobiography and say they “couldn’t be more simple – or profound.”

That seems to be what Williams was known for…writing simple songs that spoke to everyday people, but in a powerful way.

Dunn certainly had a lot to live up to when he chose to cover “I Can’t Help It,” but if anyone could do the song justice, it would be him. After all, Dunn has often been praised for having one of the strongest and most “country” voices in all of music.

It’s essential for anyone covering “I Can’t Help It” to not only be a talented singer, but to be someone who can relay its emotions. Dunn is that someone, as he fully conveys the heartache behind the words that Williams wrote decades ago.

We could go on and on about Dunn’s rendition of “I Can’t Help It,” but think it’s best if you just listen to it yourself. You can do so by tuning in to the audio clip below.

After hearing this, we’d like to see Dunn tackle some of Williams’ other recordings. Which one of Williams’ songs would you like to hear him cover some day?