Remembering The Cast Of “Bonanza” 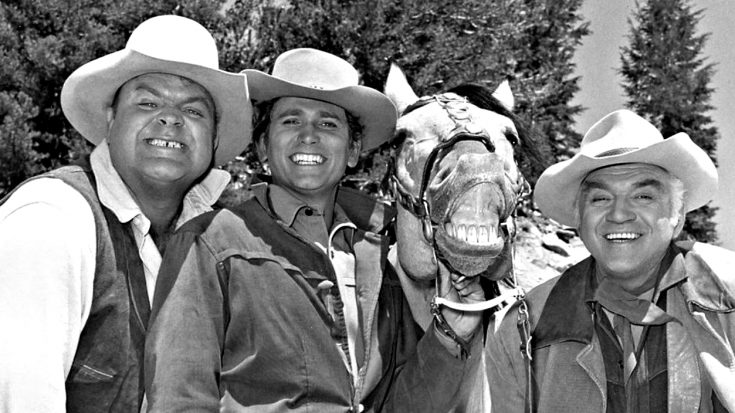 Along with the Cartwright family was an array of supporting characters including Sheriff Roy Coffee and “Candy” Canaday. Because the show began in 1959, almost all of the actors who worked on the show have sadly passed away, except for two.

So, let’s meet the cast of Bonanza and find out which cast members are still with us.

Lorne Green played Ben, the patriarch of the Cartwright family for the show’s entirety. He was 44 when he began the role and was just 13 years older than two of the actors playing his sons. Green was also known for playing Commander Adama in the TV series Battlestar Galactica.

What I absolutely loved as a kid was Battle Star Galactica with Lorne Green. pic.twitter.com/pF2DN1N0Ox

In 2007, he was ranked second on a TV Guide list of their favorite dads on television. Green passed away at the age of 72 on September 11, 1987 from complications from pneumonia.

Happy Birthday to Pernell Roberts, who would have turned 90 today! pic.twitter.com/NMlcYmncin

The eldest of the Cartwright brothers, Adam had a degree in architectural engineering and built the ranch house. Pernell Roberts, who was mainly a stage actor before landing this role, had a hard time with the schedule. Bonanza had 34 episode seasons, which is grueling in any generation of television.

Roberts left the show after a whopping 202 episodes, though the show ran for 431. He went back to the stage and toured with the musicals The King and I, Kiss me Kate, Camelot, and The Music Man. He continued to work on the stage and the small screen for many years. Roberts passed away from pancreatic cancer on January 24, 2010. He was 81 years old.

Dan Blocker, aka”Hoss,” was drafted into the United States Army during the Korean War. He had basic training at Fort Polk, Louisiana. He is best remembered for his role as Hoss Cartwright in #Bonanza. He received a Purple Heart for wounds in combat. pic.twitter.com/5yoG4xamsC

Eric “Hoss” Cartwright was one of the most beloved characters on the show. He was a warm and lovable giant. Played by actor Dan Blocker – who stood at six-foot-four, and weighed 320 pounds – he was just as loved as his character. The crew said he was the “least actor-ish as well as the most likeable” cast member on set, according to the book Bonanza: A Viewer’s Guide to the TV Legend.

Blocker unexpectedly passed away in 1972 at the age of 43 from a pulmonary embolism following surgery to remove his gall bladder. Bonanza chose to kill off his character following his death, marking the first time a television show killed off a major young male character.

He left behind a wife, Dolphia, and four children, one of which followed his footsteps and became an actor himself. His name is Dennis Dirk Blocker, but goes by Dirk – and he looks JUST like his dad. Dirk currently stars as the hilarious Detective Hitchcock on the NBC comedy Brooklyn Nine-Nine, but has had a long career in show business. His credits range from Baa Baa Black Sheep, to Poltergeist, to Walker, Texas Ranger, and even made an appearance in the TV movie Bonanza: The Return, just to name a few.

Michael Landon is trending. I grew up in Bonanza and Little House reruns. Little House in particular dealt with some important issues. Also Little Joe could get it. RIP pic.twitter.com/qjAA8r7G50

20-year-old Michael Landon landed the role of the youngest Cartwright brother. He

After wrapping up Bonanza in 1974, Michael went on to land another huge role on the TV show Little House on the Prairie. He played Charles Ingalls for the entirety of the series, which ran on NBC from 1974-1982. After Little House, Michael starred in – and produced – the NBC TV series Highway To Heaven from 1984-1989.

He is such a legend in the television world that only one person graced the cover of TV Guide more times than him – Lucille Ball.

Michael passed away in 1991 at the age of 54 from an aggressive form of pancreatic cancer, leaving behind nine children from his three marriages. Several of his children followed in his footsteps, with one even landing a role on Little House of the Prairie. Thanks to Season 3 of the wildly popular Paramount Network TV show, Yellowstone, we have now met his youngest daughter, Jennifer. She plays Teeter on the series.

Last week we learned what happens when you call Teeter a hick. What mayhem is in store for episode 5 of Yellowstone? I can’t say much, but @hassieharrison is gonna help us find out. @yellowstone @paramountnetwork #yellowstonetv #yellowstonepark

Sheriff Roy Coffee was featured in 98 episodes of the series from 1960-1972, played by veteran actor Ray Teal. He had a 37-year career, appearing in projects with James Garner, Roger Miller, Darren McGavin, and many more. Teal passed away at the age of 74 in 1976.

55 years ago today in 1964, #GuyWilliams makes his 1st of 5 appearances as Will Cartwright on NBC's #Bonanza in the episode "Return To Honor." Williams was set to become a full time cast member in the next season, had Pernell Roberts decided not to stay on for one more season. pic.twitter.com/0qjm5wsvvh

Guy Williams was brought in in 1964 to play Ben’s nephew Will when Pernell was planning to leave. Show runners wanted there to be four Cartwright characters in the series, so he made five appearances in what was supposed to be Pernell’s final season. After Williams was introduced, Pernell decided to stay for one more season, essentially pushing the Will character out.

You may know Williams as the title character in the series Zorro.

Joining the cast in Season 9, “Candy” Canaday was an army brat-turned cowboy who became a confidant for the Cartwright family and their ranch foreman and timber vessel captain. “Candy” was played by David Canary from 1967-1970. He left the show following a contract dispute, but Canary became a television legend, thanks to his longtime role as Adam Chandler -and his twin brother Stuart – on All My Children.

He played the role full time from 1983-2010, with occasional returns to the series the next couple years. Canary received 16 Daytime Emmy nominations and won five times.

We honor Victor Sen Yung because he was the winner of a thrilling contest as to "Which character on Bonanza was your favorite?" Although a dark horse, Hop Sing – the Cartwright's cook – reigned supreme, w/ 2 votes. But still the winner! And Hop Sing was played by Victor Sen Yung. pic.twitter.com/ySGkMgU5UM

While he was more of a backdrop character, Victor Sen Yung was in over 100 episodes over his 14 years on the series. He played the Cartwright’s cook Hop Sing whose blood pressure boiled if any of the men were late for dinner.

Yung’s character was the comedy relief, but used martial arts in one episode to defeat a family foe.

After acting, he ran a small mail-order Chinese pottery business. In 1980, at the age of 65, Victor was making clayware and curing the items in the oven when he died from natural gas poisoning due to a gas leak. Bonanza co-star Pernell Roberts gave the eulogy and paid for the funeral expenses.

After Canary left the show in 1970, the writer’s felt they should bring in a young actor so Ben could give some fatherly advice. They brought in a 14-year-old Mitch Vogel during Season 12 to play an orphan named Jamie Hunter. He is eventually adopted by Ben and remained on the show until the final episode.

Vogel is one of the two remaining cast members still alive. Aside from Bonanza, he is also known for Yours, Mine, and Ours and The Reivers. In 1978, Vogel left show business and started a family. In 2002, he narrated a Travel Channel special about the set locations for Bonanza.

Tim Matheson joined the cast in the final season of Bonanza as parolee Griff King. He comes to Ponderosa Ranch and reforms his life under the wing of Ben Cartwright.

After Bonanza, Matheson continued working in both television and film,with his most notable roles being Eric “Otter” Stratton in National Lampoon’s Animal House, Vice President John Hoynes in The West Wing, which earned him two Emmy nominations, and president Raegan in the TV movie Killing Raegan. He also played Henry Ford’s eldest son in Yours, Mine, and Ours.

More recently, he played Dr. Breeland on Hart of Dixie and currently stars in the Netflix series Virgin River.

A post shared by virgin river / jack and mel ❤ (@virginriverseriesfan)

After Canary left the show, Lou Frizzell was also brought in and accompanied orphan Jamie Hunter to the Ponderosa. His character became the Cartwright’s foreman. He passed away at the age of 59 in 1979.