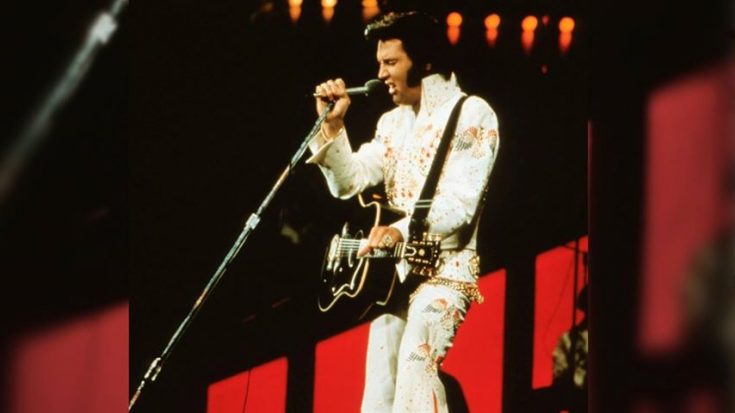 Even one of brightest stars is unable to shine without darkness. This was especially true of the King of Rock n’ Roll, Elvis Presley. The final three years of the legendary singer’s life were ones his most loyal fans prefer to forget, and with good reason.

If you’re looking for one last bright spot or an Elvis memory to hold onto and remind you of his greatness, flip back in time to January 14, 1973. This was the date of Elvis’ Aloha From Hawaii Via Satellite concert special.

Elvis slimmed down for the Hawaiian event. He felt good and looked good. Maybe it was because he loved Hawaii. He said it made him happy. In reality, it was the calm before the storm.

The King made history (again) in 1973 by becoming the first solo entertainer to hold a live concert broadcast internationally via satellite around the world. Watched by more than one billion viewers from 40 countries, “Aloha From Hawaii” became the most watched broadcast by an individual entertainer in television history.

Presley presented on the Big Island with passion and purpose, giving adoring fans a glimpse of talent that would soon give way to depression and sorrow.

One Of His Biggest Hits

True to his word, it became of the biggest and best performances ever. Presley sang more than 20 songs including his greatest hits and fan favorites.

One of Elvis’ biggest hits of all time was always on his set list. “Suspicious Minds” remains one of the iconic singer’s most memorable songs.

For the many who were fortunate enough to be present at the Hawaiian event, they will forever remember this moment in history, the final farewell by the Elvis the world knew and adored.

From fervor to sadness, Elvis shared every emotion with the sold-out audience as only he could do.

Elvis’ live appearance represented the last flicker of brilliance before the superstar devolved into a deteriorating state that left him a confused performer who was lucky to make it through his set without collapsing. There was universal concern about the entertainer’s downward spiral.

On August 16, 1977, Elvis Aaron Presley, arguably the greatest performer to ever live, was taken from his mansion by ambulance to a Memphis hospital. He died that afternoon.

While the King may be gone, his music will live on forever.

Want to see the whole live concert as originally shown? We’ve got it here for you! Get ready for one of the best concerts ever. Roll back to 1973. You are there!