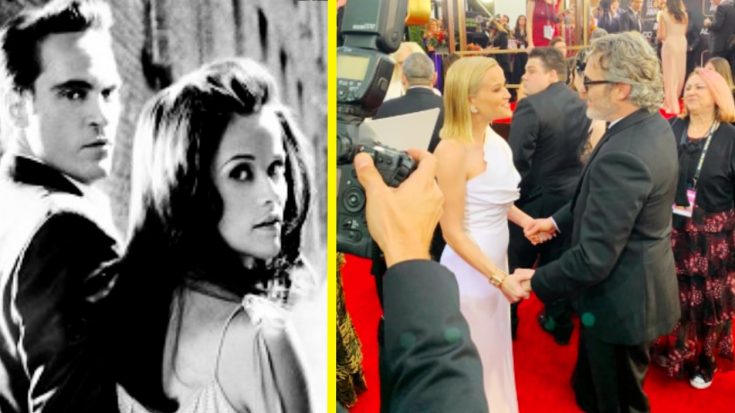 In September 2005, a biopic about two country music legends began playing in theaters. That movie, titled Walk the Line, showcased the life and career of Johnny Cash, and explored his relationship with his future wife, June Carter.

Johnny was portrayed by Joaquin Phoenix, while June was played by Reese Witherspoon. Both were nominated for Best Actor/Best Actress – Motion Picture Musical or Comedy at the Golden Globes, and both won.

Next movie on my list to watch. My love for @reesewitherspoon already knows no bounds and well I can’t think of anyone better for Mr Cash than Joaquin Phoenix. Cannot wait to watch. Hate that I haven’t already. #walktheline #jonnycash #junecartercash #goodolcountrymusic

It’s hard to believe it, but we’re now approaching the 15th anniversary of Walk the Line‘s release. After all this time, Reese and Joaquin remain two of the brightest stars in Hollywood.

So it came as no surprise when both of them earned nominations at the 2020 Golden Globes.

Joaquin was nominated for Best Actor in a Motion Picture – Drama, for playing Arthur Fleck/the Joker in Joker. He ended up winning the award.

Earlier in the night, the two Walk the Line co-stars reunited on the red carpet, much to fans’ delight. Cameras captured the pair holding hands while they spoke with one another.

“I AM GOING TO CRY,” wrote one excited fan with the Twitter handle @itsurgirlnic while sharing some pictures of the co-stars’ reunion. See that tweet along with some other photos of Reese and Joaquin’s meeting below.

REESE WITHERSPOON AND JOAQUIN PHOENIX I AM GOING TO CRY. #GoldenGlobes pic.twitter.com/0OWEDGDdlK

JUNE CARTER AND JOHNNY CASH REUNITING ON THE CARPET!!!!!

Reese Witherspoon getting her hellos in with Joaquin Phoenix and Rooney Mara. #GoldenGlobes pic.twitter.com/wfFDvukAae

We too, were happy to see Reese and Joaquin together again after so long.

They worked wonderfully together in Walk the Line, as you can see when you watch one of their scenes from the film below. The video shows them singing Johnny and June’s “Jackson,” which went on to become known as one of the greatest duets in all of country music history.

After this Walk the Line reunion at the Golden Globes, we’re itching to see Reese and Joaquin star in a new project together!