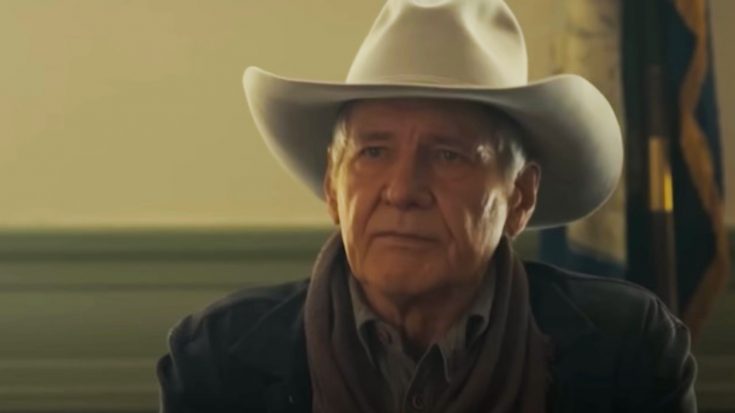 The third episode of 1923 ended in bloodshed. The Duttons were attacked by Banner’s men, and John Dutton was killed during the gruesome fight. Jack and Jacob Dutton were injured, as was Jack’s fiancée Elizabeth Stratford.

Episode 3’s final moments showed Cara Dutton writing to her nephew Spencer in Africa. She called on him to return to the Yellowstone ranch in the aftermath of his brother’s (John’s) death. Cara also voiced her belief that Jacob would die too.

After leaving off on that cliffhanger, fans were anxious to see Episode 4 to find out if Jacob survived. Did he? We’ll answer that question for you below.

But first…if you DO NOT want to have the events of Episode 4 spoiled for you, DO NOT keep reading below this line.

Episode 4 of 1923 is titled “War and the Turquoise Side.” It opens by showing the Duttons’ home absolutely drenched in blood. Cara tries her best to clean up the mess, both literally and figuratively.

She opts to mail her letter to Spencer rather than wire it. In doing so, she hopes she won’t draw attention to the fact that her family is in a weakened state.

Jack stands guard next to Elizabeth’s bed as she recovers. Her mother shows up, and says she and Jack should call off the wedding. She wants to take Elizabeth back East…far away from the ranch’s dangers and drama.

But Jack and Elizabeth protest. Her mother smacks Jack before Cara steps in and stands up for the couple. She smacks Mrs. Stratford, and tells her to leave.

Emma Dutton goes to the family graveyard to bury her husband. She buries him near his mother, Margaret.

These early scenes also give us a look at Jacob. Remarkably, he’s alive, though not in good shape by any means.

Meanwhile, Banner plots to hit the Duttons while they’re down. He enlists the help of a man named Donald Whitfield to attack the family again. This attack results in the theft of the Duttons’ cattle and the deaths of some of their cowboys.

Cara seeks guidance from Jacob, who is still bedridden. He encourages her not to do anything rash until Spencer gets her letter and returns from Africa.

Trying to keep up appearances, Cara attends the town hall Livestock Association meeting in her husband’s place. Not wanting people to know how grave his condition is, she lies and says he’s in Wyoming chasing after cattle thieves.

During the meeting, Cara manages to earn enough votes for a proposal to form a police force. It’s her hope this police force will help address the ongoing ranch war.

Separate from the Duttons, we also see boarding school student, Teonna Rainwater, kill Sister Mary after having enough of her abuse.

Episode 4 ends with Spencer and his new love interest, Alex, reading through letters he’s received from Cara. She mailed many letters to him while he was fighting in World War I, but he never read them. Alex coaxes him to read the letters then, and he does.

Then, Spencer uncover’s his aunt’s most recent letter detailing his brother’s death and the attack on his family. The episode concludes as Alex informs him the letter was written just three months before.

There you have it folks…that’s a full recap of 1923‘s fourth episode! Will Spencer return to Montana to help his family? Will Jacob recover from his injuries? Will Jack and Elizabeth be able to get married? We’ll just have to wait and see…

Head below to watch some must-see moments from the three episodes of 1923 prior to this one.