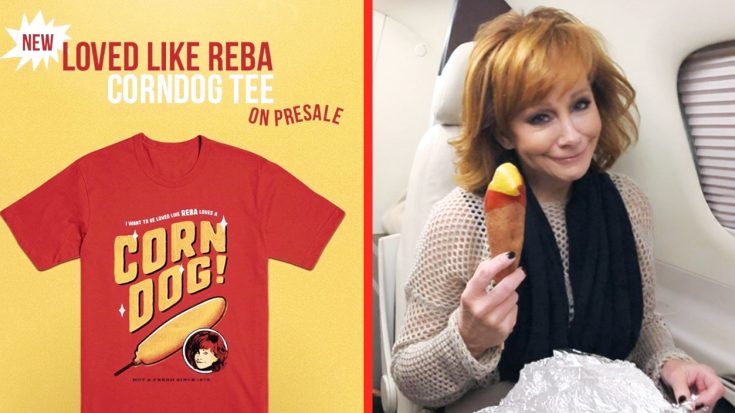 It is hard not to love country music star and TV personality, Reba McEntire. The woman has a way of making us laugh, cry, and feel like we could take on the world – all at the same time. From singing some of country music’s greatest ballads like “The Night The Lights Went Out In Georgia” and “Fancy” – to starring in movies like Tremors and her own TV show, Reba – she’s done it all. Some might even wonder… what keeps this talented, busy woman fueled while on the road?

Well, she definitely isn’t a fan of tiny foods. Back in 2013, Reba posted a picture of herself pointing to the tiniest hamburger ever seen. The look on her face says it all: “Is this for me, or a mouse?”

No, no… Reba needs something much more substantial to get her through the busy day. Something she can eat on the run… or on a plane. Reba, as many of her die-hard fans know, LOVES her corndogs. Naturally, she has gone public and posted several pictures of herself eating them on her private jet.

And this one, from that time she went to the Mississippi Valley Fair in Davenport, Iowa. She even gives them – and their corndogs – a big shoutout on Instagram.

Thanks to everyone at the Mississippi Valley Fair in Davenport, Iowa. We had a blast! You guys are superduper great! #corndog

Then, she hit the jackpot in Iowa at the Iowa State Fair when Campbells Corndogs hooked her up with almost a dozen corndogs for her flight back!

Heaven!!!! Thanks so much Iowa State Fair and Campbells Corndogs!!! Great audience!!!!!

While more and more photos have come out in the past few years, her love affair with corndogs isn’t new. Actually, it seems to have been going on for quite some time. In response to her new t-shirt design, a fan who met Reba years ago posted a signed photo of her looking pretty vintage – and enjoying a corndog!

Now, Reba has taken her love to the next level. She recently posted on social media that she has created a very special shirt for herself – and of course, all her corndog-loving fans. “You know I LOVE a corndog!!!” Reba exclaims, “Now I’ve got a t-shirt I can wear to show how much I do!”

You know I LOVE a corndog!!! Now I’ve got a t-shirt I can wear to show how much I do! ? Pre-order yours here: https://t.co/nPiOki9Jt9 pic.twitter.com/oxCqOptrce

The photo accompanying the post looks like something straight out of a country fair advertisement you’d find in your local store. The quote on the shirt only adds to the comical mustard yellow and ketchup red style by saying, “I want to be loved like REBA loves a CORNDOG!” Underneath the word “corndog” is an image of the mouthwatering fair food followed by Reba’s face popping out of the background.

Finally, the fine print pays tribute to her music career with a simple “Hot & Fresh since 1975” – the year of her first record deal.

So far, the reception of her shirt has been priceless. Fans have posted memes, pictures, and praise for the country singer’s sense of humor. The best part – you can get her hilarious shirt for $30 to show your love for Reba (and corndogs). It is currently on pre-sale through Reba’s website store and will ship out September 14.

While corn dogs are a staple for kids growing up in the U.S.A. – many people around the world are deprived of this delicious fair food. Luckily, Reba set out to change all that when she introduced U.K. comedian and television personality, James Corden to the food. His response – priceless.

Watch Reba give her English friend the gift of a lifetime: a hotdog, deep-fried in delicious batter and dipped in ketchup and mustard! Let us know what you think of his reaction in the comments below!