Reba Shows Up At Kelly Clarkson’s 2019 Concert, Joins Her In Medley Of Songs 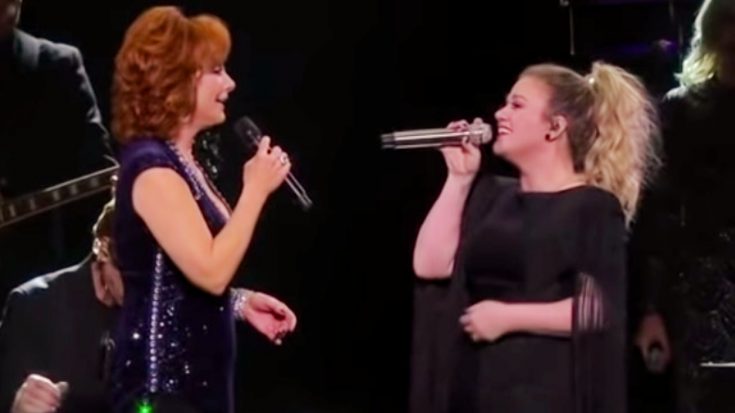 Kelly Clarkson introduced a unique and entertaining segment into her Meaning of Life Tour in 2019. The segment, which Clarkson called “A Minute and a Glass of Wine,” gave fans at home the chance to see part of her concert if they were unable to attend in person.

How dide Clarkson accomplish this? By streaming that portion of the concert on Facebook Live and later uploading a video of the full segment to her official YouTube channel.

These segments typically featured special guest singers, often contestants who Clarkson had coached on The Voice. She even got Season 15 winner Chevel Shepherd to join her on one occasion!

Clarkson pulled out all the stops for her Nashville show, inviting one of country music’s most iconic artists to join her for the special segment of her concert. But to Clarkson, this artist is far more than just a fellow singer or a role model to admire…she’s family.

Of course, we’re talking about Reba McEntire. She and Clarkson share a connection that you may not realize…Clarkson was married to Brandon Blackstock, the son of McEntire’s ex-husband, Narvel. That means McEntire was the mama-in-law to Clarkson and a grandma to her kids.

The two were friends long before Clarkson and Blackstock married. Back in 2007, the pair released a country rendition of Clarkson’s powerful hit, “Because of You,” which they performed as a duet.

It was that exact song that McEntire walked out singing as she surprised the crowd gathered at Clarkson’s Nashville show. Stopping to hug Clarkson and give her a kiss on the forehead, McEntire moved on gracefully singing her part of the song.

But their collaboration didn’t end there. The duo ripped into a fiery medley of some of McEntire’s most iconic hits, including “Can’t Even Get the Blues,” “Is There Life Out There,” and of course, “Fancy.”

You seriously haven’t lived until you’ve heard McEntire and Clarkson sing “Fancy” together. They’ve done so many times in the past, and have still got it after all these years.

Sharing A New Track Too

On top of visiting McEntire’s longstanding hits such as “Fancy,” the pair also introduced one of the country legend’s newest songs. That song is “Freedom,” the first single released off of McEntire’s album Stronger Than the Truth.

“It’s about this woman who’s had bad relationships, bad luck in love and then she finds this one person,” McEntire told Taste of Country when asked about the song’s meaning. “He gives her the freedom to love. He is the right person for her.”

The vibrant single is made all the more powerful with the addition of Clarkson’s voice during their live collaboration.

By now we’re sure you’ve gotten the hint that McEntire and Clarkson’s medley performance is something you absolutely can’t miss. Go ahead and check it out below. McEntire makes her grand entrance around the 3:15 mark, and you can hear the crowd go wild!

We always get goosebumps every time these two sing together, don’t y’all?