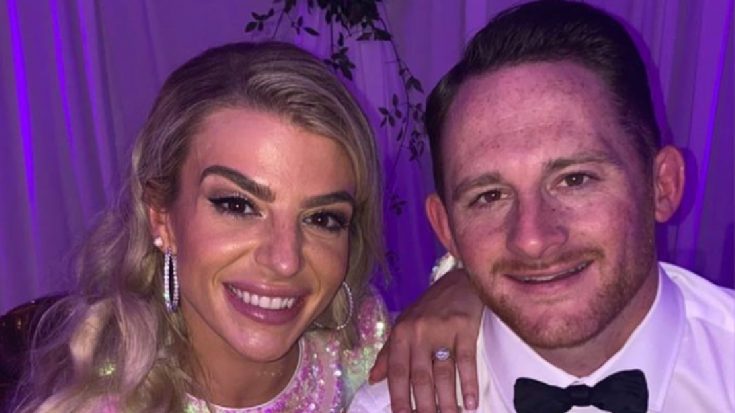 Reba McEntire’s only son, Shelby Blackstock, is a married man! The 31-year-old race car driver said “I do” to his longtime love, Marissa Branch, at Walt Disney World on Saturday, February 12.

Their magical ceremony took place at Disney World’s Magic Kingdom in front of the park’s iconic Cinderella’s Castle. The bride, a “self-proclaimed Disney Princess,” looked stunning in a princess gown of her own with a long, lace train, a plunging neckline and open back. She arrived at the ceremony in a horse-drawn carriage, much like the one from Cinderella, and walked down an aisle covered in flower petals as an instrumental rendition of “Beauty and the Beast” played in the background.

Photos and videos shared by family and friends show the couple stepping out of the magical lighted carriage after the ceremony. The new Mr. and Mrs. Blackstock can also be seen sharing their first dance to Kacey Musgraves’ “Butterflies.”

One touching clip shows Shelby dancing with his mom, Reba, to one of her own songs, “You’re Gonna Be.” The tender ballad tells the tale of a first-time mom welcoming her baby into the world. She vows to love and protect her child, despite never having been a parent before and feeling scared about the mistakes she was going to make.

Shelby and Marissa’s nuptials come a little more than a year after their Disney World engagement that took place December 31, 2020.

See photos of the couples’ magical Disney wedding below. To see more photos and videos from Shelby and Marissa’s wedding, check out their Instagram stories HERE.