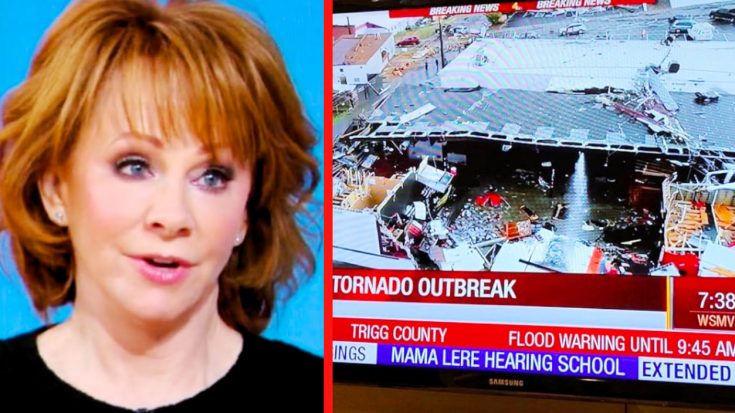 In the early morning hours of Tuesday (March 3), a storm tore through Nashville and middle Tennessee. The storm created at least one tornado, which ended up causing extensive damage.

The Nashville Fire Department told The Weather Channel it had responded to reports of 40 collapsed buildings in the city. Photos posted on Twitter show many recognizable Nashville structures and businesses now in ruins.

Before and after: Burger Up, Basement East, Family Dollar, and Molly Green ? #nashvilletornado #NashvilleTN pic.twitter.com/IysVbpMDoM

BREAKING: Building collapse reported near downtown Nashville after tornado hit the Music City; first responders have not confirmed a number of injuries

Reports on the number of those killed and injured vary. Since responders are still searching for people trapped in the rubble, the death toll may continue to rise in the coming days.

As the sun rose and daylight broke, many country artists and music industry people took to social media to let their fans know they were okay.

Country radio host Bobby Bones let his followers know that he and his team members were all “safe,” and encouraged everyone to pray for those affected.

Thank you for all the asks and people reaching out to us. We are ok and our team is ok. Please keep praying for those who weren't so lucky in Nashville.

Country music legend Reba McEntire joined the chorus of artists who expressed compassion for those affected by the storm.

Taking to Instagram early on Tuesday morning (March 3), McEntire posted a photo that shows a news report about the tornado playing on her TV. The report she was watching showcased how the tornado destroyed one structure in the Nashville area.

McEntire let all of her fans know that she and her family were alright, saying the tornado “didn’t hit our personal space.”

Despite this, McEntire said she was still devastated by the storm, and shared her prayers for those affected by it:

“My heart, thoughts and prayers go out to everyone in the Nashville area affected by the tornado last night…” McEntire wrote. “…we are all affected because we are Nashvillians. My heart hurts for Nashville this morning.”

You can read McEntire’s full message below.

My heart, thoughts and prayers go out to everyone in the Nashville area affected by the tornado last night. Even if the tornado didn’t hit our personal space, we are all affected because we are Nashvillians. My heart hurts for Nashville this morning. #sendingprayers

If you’d like to help those who were affected by the tornado, here’s one way to donate:

The United Way is also collecting donations. Those who wish to donate to its relief fund can do so in a few ways:

We too, join McEntire in praying for all who have been affected by the tornado.