Reba McEntire Sings One Of Her Favorite Kenny Rogers Songs 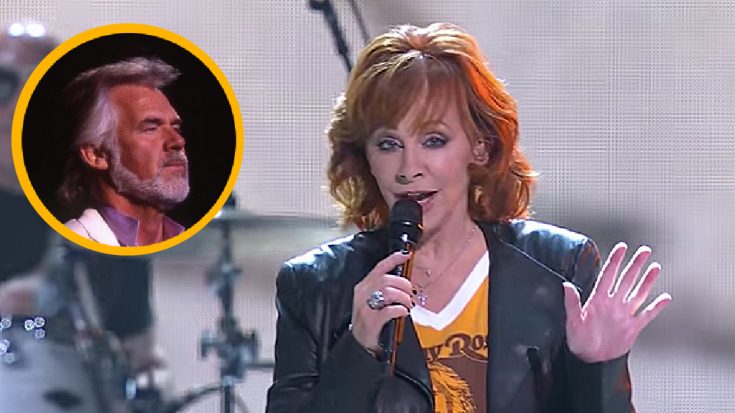 18 months ago music lost one of its most beloved and recognizable voices when Kenny Rogers passed away at the age of 81. Prior to his death, many of Rogers’ friends gathered to honor him with a final star-studded concert in his honor.

Kenny Rogers: All In For The Gambler was filmed before Rogers passed away, but recently aired on television to honor the late singer. One of the artists who performed was Reba McEntire who sang Rogers’ 1978 release “Reuben James.” The song was first recorded by Rogers and his band The First Edition ten years prior as part of their “Ruby, Don’t Take Your Love to Town” album, then was recorded by Rogers for his famous Greatest Hits project.

McEntire called it “one of my favorite Kenny Rogers songs,” and performed it while wearing a Kenny Rogers t-shirt and black leather jacket.

“I just loved Kenny. Kenny was a super person. I toured Australia with him.,” McEntire said Rogers. “That was my first trip and then went back on my own. But Kenny was funny, told the best stories, the best jokes, and I just loved being in his presence. So, when they asked if we would do the tribute, I said, absolutely to a good friend.”

In addition to being her tour mate, Rogers held a special place in Reba’s heart as she credited him with helping her recover after she lost her band members in a plane crash in 1991.

“Kenny’s manager called Narvel [Blackstock] and asked, ‘Would Reba be interested in doing Gambler 5?’” McEntire remembered, referring to movie The Gambler Returns: The Luck of the Draw. “Narvel said, ‘I don’t know.’ I said, ‘Yes, absolutely.’ It probably saved my sanity to get out of Nashville and go to California and work and be absorbed in dialogue and work and get up early, work hard and by the time you’re ready to go to bed, you went to sleep, which wasn’t happening.”

It was only fitting that Reba honor her friend at the Kenny Rogers: All In For The Gambler concert by singing “Reuben James.” Watch a clip of Reba’s performance in the video below.

🎶 I loved you then and I love you now, Reuben James…🎶

Don't miss @reba and many more incredible artists unite to honor country legend @_KennyRogers TOMORROW on Kenny Rogers: All In For The Gambler at 9/8c on CBS! #KennyRogersCBS pic.twitter.com/NTQlrZzUxn