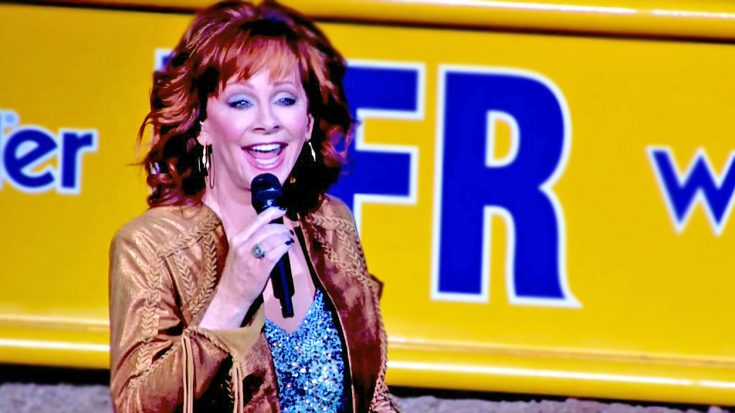 Although Reba McEntire always had a love for music in her heart, she devoted the earlier years of her life to the rodeo. It only made sense for her to do so, since her entire family was involved in the rodeo. In fact, her father, Clark McEntire, went on to become a Pro Rodeo Hall of Famer.

Reba competed in the rodeo herself, and was actually a skilled barrel racer. She would eventually be discovered at a rodeo one day, though not for her barrel racing.

In 1974, Reba had the honor of performing the National Anthem at the 1974 National Finals Rodeo in Oklahoma City. Following the rodeo that day, Reba, her family, and a few music industry people all met in the Justin Boots suite at the Hilton nearby. Western and country singer Red Steagall was there, and he ended up changing Reba’s life forever.

On Monday (December 18), Reba shared a special video in which she recalled her 1974 National Anthem performance. She relayed what happened in the suite that night, saying that everyone was passing around a guitar and singing songs.

After a while, someone asked Reba to sing Dolly Parton‘s “Joshua,” and she was happy to do so. While she did, her mama pulled Red to the side and asked him if he would be able to help get Reba and her siblings into the music business.

But after a few months, the memory of Reba’s outstanding National Anthem and “Joshua” performances remained vivid in Red’s mind. He called up Reba’s mama and made her an offer to help Reba kick off her music career.

“Red did call Mama back and said, ‘Why don’t we try Reba. Get her foot in the door and maybe we can bring Pake and Susie in later,'” Reba said. “So, that’s what happened, and eleven months later, I had a Polygram/Mercury Records contract.”

Reba brought things full circle on Friday (December 15) when she returned to the same rodeo event to perform the National Anthem yet again. Though it is now hosted in a different venue and is called the Wrangler National Finals Rodeo, the event is still the same “stage” where Reba was discovered decades ago.

As you would expect, Reba ended up delivering a majestic performance of the National Anthem. A fan caught almost all of her performance on video, and it’s a joy to watch.

In her behind-the-scenes clip about her appearance at the event, Reba shared some footage of her 1974 National Anthem performance that helped her get discovered. She placed that footage directly in front of the performance she just delivered the other day, showing how her voice has grown and matured as she has.

Listen to Reba speak further about her National Anthem performances and her rodeo history when you tune in to the clip below.

We’re so glad that Reba was in the right place with the right people in 1974, because they helped introduce her talent to the world. Now she’s a superstar!