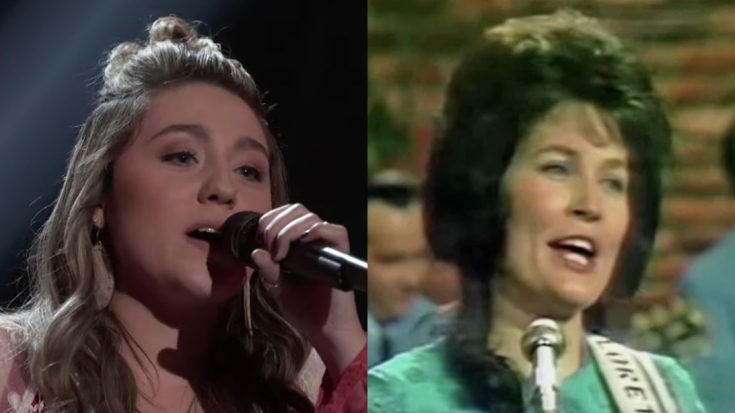 A classic country music cover nearly stole the show during Tuesday night’s The Voice Blind Auditions. The only true country performance of the night came from 18-year-old Hannah Kay who took her love of country music back five decades with a stunning cover of Loretta Lynn‘s signature song “Coal Miner’s Daughter.”

The song was first released in 1969 and was an autobiographical telling of Loretta Lynn’s childhood in rural Kentucky. It recalls how she and her seven siblings lived off of a coal miner’s salary and shares heartfelt memories of her father making sure there was love in the Webb household.

Few artists have covered Lynn’s song as it is a deeply personal account of a life that only she had lived, but Lynn did re-record the song in 2010. With the help of Miranda Lambert and Sheryl Crow, Lynn gave new life to the classic hit for the tribute album Coal Miner’s Daughter: A Tribute to Loretta Lynn.

When Hannah Kay, a Magnolia, Texas, native, took The Voice stage on Tuesday, coach Blake Shelton immediately celebrated upon hearing the opening chords, recognizing the song as a Loretta Lynn hit. Before Kay had finished singing the first verse, Shelton turned his chair and was quickly followed by coach Kelly Clarkson.

“I do love the authentic country, which is missing,” Kelly told Hannah following her performance. “I get why you’re probably inclined to go to Blake’s team. I get that he’s on country radio…I’d be happy to work with you, but I understand if you don’t pick me.”

Blake followed up with praise of his own for Kay, saying, “I heard Kelly mention the old style and that it’s not really out there anymore. And, the truth is…it is out there. It’s just not being celebrated. Hannah, you can be that female. You can be the one that gets those kind of records back in the mainstream.” Blake added, “She is the real deal. I worship that about you, Hannah.”

@blakeshelton #VoicePremiere#Winner Hannah Kay can go all the way

Last year’s winner, Chevel Shepherd, secured her place in the Season 15 semi-finals with a cover of Loretta Lynn’s “You’re Lookin’ At Country.” It proved to be a lucky charm for Shepherd as she took home the Voice trophy shortly thereafter.