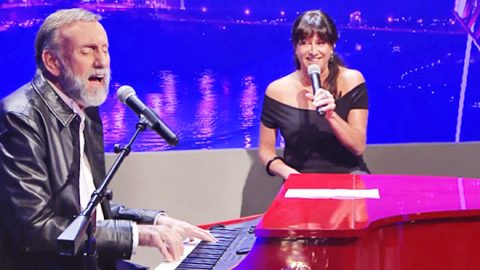 A true entertainer. That’s how many fans would describe Ray Stevens.

He is a jack of all trades as he can sing comedic and novelty tunes like “The Streak” and ” Gitarzan” as well as serious, spiritual songs such as “Everything Is Beautiful.”

Stevens released “Everything Is Beautiful” in March of 1970 to rave reviews. It reached the top spot on the Billboard Hot 100, Easy Listening, and Cash Box Top 100 charts and won Stevens a Grammy for Best Male Pop Vocal Performance. He also received five other nominations including Record of the Year and Song of the Year.

The song begins using the hymn “Jesus Loves Me,” and in the original recording, is sung by Oak Hill Elementary School children, including Stevens’ two daughters. Now, 48 years later, his daughter Suzi joined him to help him perform “Everything Is Beautiful” at his theater CabaRay Nashville.

Ragsdale once again sang the introduction of “Jesus Loves Me,” while Stevens beamed with pride behind the piano. He took over lead vocals for a bit before they came together in perfect harmony, thrilling fans with a one-of-a-kind performance. Each singer was able to shine during their solos, but they really impressed us when they were singing together!

Watch Stevens and Ragsdale perform “Everything Is Beautiful” together in the video below.

"Everything Is Beautiful" Ray Stevens with Suzi Ragsdale

In March of 1971 Ray won a Grammy for his song “Everything Is Beautiful” for Best Contemporary Male Vocalist along with 5 other nominations including Record of the Year and Song of the Year. Check out this wonderful version performed by Ray and his daughter, Suzi Ragsdale, on CabaRay Nashville!