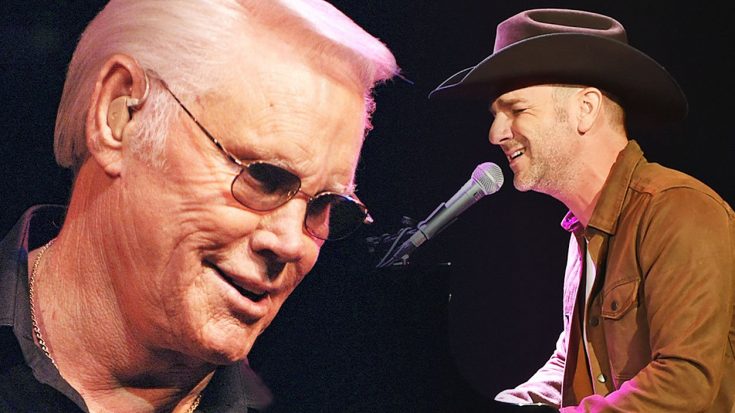 While George Jones‘ “He Stopped Loving Her Today” may be one of the saddest country songs, it is also one of the best. In fact, multiple surveys and publications have named the ballad as the all-time greatest country song to ever exist.

Jones was not a big fan of the song at first, but came to develop an appreciation for it after it helped restore his career. The song was a number one hit on the Billboard Hot Country Singleschart and also led Jones to win the Grammy Award for Best Male Country Vocal Performance in 1980.

Since “He Stopped Loving Her Today” is considered to be Jones’ signature piece, other artists like to honor him by offering up their own versions of the song. One such artist is Craig Campbell, who performed a stirring rendition of the ballad during a recent appearance at the famed Ryman Auditorium in Nashville.

Known for songs such as “Keep Them Kisses Comin'” and “Outskirts of Heaven,” Campbell has a great deal of respect for the artists who came before him. That shows in his performance of “He Stopped Loving Her Today,” which he gave everything he had.

Campbell shared a video of his performance on Facebook, writing that he was “nervous” to sing the song that night. His nerves were heightened because of a few superstar audience members who were watching: Garth Brooks, Trisha Yearwood, Bobby Braddock, and Kris Kristofferson.

But Campbell had no need to worry, because once he started singing the words flowed effortlessly. Campbell played the piano the entire time he sang, which gave an even more mournful feeling to the performance.

Campbell filled his voice with passion as he sang, and that passion continued to build throughout the entire performance. We’re sure everyone in the crowd had goosebumps once they heard him sing the final note.

Tune in below and brace yourself for the wave of emotions you’ll feel once you hear Campbell sing “He Stopped Loving Her Today.” We think his performance would have made Jones proud.

Boy was I nervous!!! To be singing “He Stopped Loving Her Today” at the Mother Church Of Country Music Ryman Auditorium in front of Garth, Trisha, Bobby Braddock, and Kris Kristofferson was almost more than I could handle ? I just hope I made The Possum proud!!