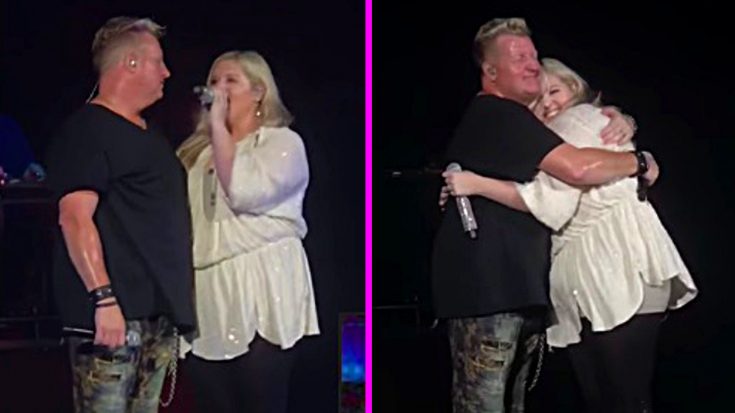 Back in 2006, country trio Rascal Flatts released a little song called “My Wish.” The touching track, told from the voice of a parent, has them speaking to their child about their greatest wishes for their future.

As you would expect, fans were instantly able to relate to the song’s personal message. It didn’t take long for it to reach the top spot on the Hot Country Songs chart, and was also a huge crossover success. So huge, it managed to claim the 28th spot on the all-genre Billboard Hot 100.

But unlike other number one hits which fade away over time, “My Wish” seems to have a cyclical life. Because of its message, it’s frequently played at graduation ceremonies and parties, as well as weddings. So even though it’s now an older song, it’s one that people of all ages are familiar with.

When “My Wish” was released in 2006, Rascal Flatts lead singer Gary LeVox’s daughter, Brittany, was just a little girl. Now, she’s all grown up, and she’s proving that she’s all set to follow in her father’s footsteps one day.

Country radio host Bobby Bones once recalled speaking to Brittany backstage at a Rascal Flatts show, and relayed the words she had to share about her father. It’s clear she’s proud of everything he’s accomplished, and would like to do some of the same things:

“This is what I want to do. I’m so proud of my dad that it almost makes me want to cry,” Bobby said, recalling what Brittany told him.

Brittany has lived behind her words, showing that she will pursue a career in the music industry one day. Back in 2016, the then 16-year-old performed “I Won’t Let Go” with her father during a concert. But that wasn’t the last time they sang a duet at a Rascal Flatts concerts.

Country fans who gathered to watch Rascal Flatts perform in West Palm Beach in July 2018 were in for a huge treat. During the concert, proud papa Gary welcomed Brittany out on the stage to sing a duet with him.

The moment would have been emotional enough on its own, but was made even more so because of their song choice. They sang “My Wish.”

After seeing Rascal Flatts more times than we can count. Gary managed to bring me to tears by bringing his baby girl out to join in singing My Wish. They didn’t do that Vegas!

“I have no words for the amazing gift that GOD has upon your life!” he wrote. “I’m humbled to be your earthly daddy but what your Heavenly Father has in store for you is more than I can barely stand!”

It’s so sweet to hear that Gary’s just as proud of Brittany as she is of him!

If you’d like to keep feeling all sentimental, look no further than the video below. This decade-old video shows the Rascal Flatts fellas singing “My Wish” in an intimate performance not long after it was released.

Watching Gary sing the song with Brittany now, you can tell it means just as much to them today as it did back then.