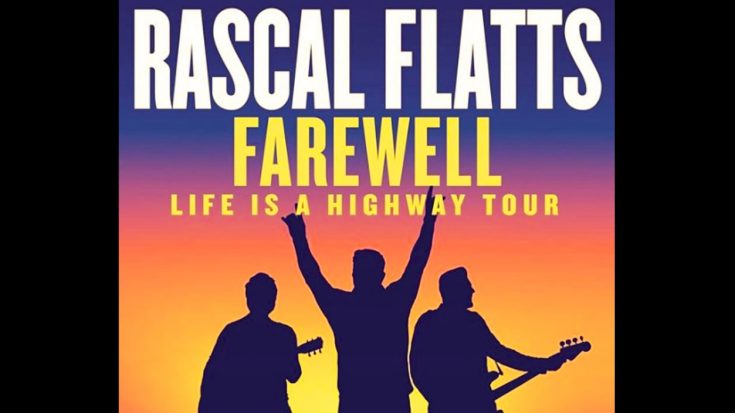 In January, Rascal Flatts shocked the country music community when they announced their plans to embark on a Farewell Tour after 20 years of performing together. The trio made the announcement on CBS This Morning, citing the need for a break as the reason for saying “goodbye” for now.

They also shared the news on social media:

“When we started out 20 years ago, we could not imagine all of the people, places and gifts we would encounter. As we head out on the Rascal Flatts Farewell – Life is A Highway Tour, there is no sadness. Just new chapters, new journeys, and new beginnings,” read the statement.

When we started out 20 years ago, we could not imagine all of the people, places and gifts we would encounter. As we head out on the Rascal Flatts Farewell – Life is A Highway Tour, there is no sadness. Just new chapters, new journeys, and new beginnings. This year, and this tour, is all about YOU. Register for first access to tickets and leave a Flatts memory on the fan wall at the link in bio.

“We’re not gonna sign some pact that says we’re never gonna tour again or something like that,” DeMarcus said on CBS This Morning. “We all still love each other.”

The group plans to share that love on their Farewell Tour, which had 25 stops when it was first announced. At that time, the tour was set to kick off in Indianapolis on June 11 and conclude in West Palm Beach on October 17.

But now, the schedule has been shaken up, as Rascal Flatts just added 11 additional dates to their Farewell trek.

On February 17, the group announced they added new stops to the Farewell Tour. The starting date of June 11 remains the same, but the tour has now been extended past October 17.

Choosing to wrap things up in Music City, Rascal Flatts announced the last stop of their Farewell Tour will be in Nashville on October 30.

What makes a road trip even more fun? Bringing friends along! Excited to announce the addition of @iamchrislane, @chaserice, @avenuebeat, @cayleehammack, @kingcalaway, @mattstellmusic and @rachelwammack to select dates on the #RascalFlattsFarewell Tour. We’ve also added new shows, including hometown stops in Columbus and Nashville! Tickets are on sale this Friday, February 21 at 10AM local time at RascalFlatts.com

The group also added a “hometown” show in Columbus, Ohio, since both LeVox and DeMarcus are from there.

In addition to the new shows, Rascal Flatts named the special guests joining them on their trek. Chris Lane, Chase Rice, Avenue Beat, Caylee Hammack, King Calaway, Matt Stell, and Rachel Wammack will unite with the trio on select dates during the tour. Check out the above image to see who will be playing with Rascal Flatts in your city!

The news of Rascal Flatts’ final tour certainly came as a surprise to us when they announced it in January. You can watch their CBS This Morning interview about their plans to say “goodbye” by tuning in to the video below.

Even though we’re sad to say “farewell” to Rascal Flatts for now, we know their tour is going to be a fun one, and can’t wait to catch a show!