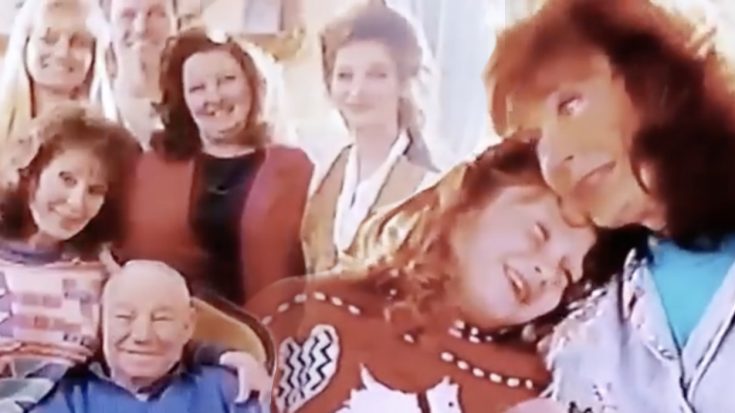 Despite being one of the most legendary names in country music, Loretta Lynn is a pretty private person, and has been her entire career. While we do know much about her life thanks to her incredible songwriting in songs like “Coal Miner’s Daughter,” we’ve never been exposed to this side of her.

In 2018, a music video was posted to Lynn’s official Facebook page for her ranch that features some footage of her family that many fans have never seen! According to the description of the video, it “was the last time that the extended Lynn family was able to gather in it’s [sic] entirety before the passing of [Loretta’s husband] Mooney Lynn” in 1996. The video was also described by the ranch as “rare.”

The photo featured in the video (above) can be seen when you take the tour of the Plantation home at Lynn’s ranch. Other footage of the video show Lynn cuddling up to her grandkids, the whole family eating a meal around the extra large dinner table to accommodate her ever-growing family, kissing Mooney, and her marveling in all of her blessings.

Singing the song “We Need to Make More Memories” off her 1994 independent album Making More Memories, Lynn’s entire family took part in this music video shoot, for the first time ever.

This music video is so rare because before her ranch posted the footage to their Facebook page, it was only sold on VHS for a short period of time and is extremely hard to find now. Unless you already have a copy of the tape, this is the only way you will see this video. The ranch itself has been searching for a copy for some time now, and has promised that if they get their hands on any digital copies – whether it be DVD or otherwise – they will let fans know.

Watch the touching music video by clicking play below.

Rare music video featuring Loretta & Mooney Lynn with the family will leave you in tears!This was the last time that the extended Lynn family was able to gather in it's entirety before the passing of Mooney Lynn. You can see the family photo taken on this day featured in the Plantation home tour at the ranch.It was sold on VHS for a short time at Loretta Lynn's Ranch but is very hard to find now. A touching family tribute and must see for Loretta fans!–#LorettaLynn #Countrymusic #Country #classicountry Loretta Lynn Official #lorettalynns #lorettalynnranch #Nashville #MusicCity #Tnvacation #SoundtrackofAmerica #madeinTN