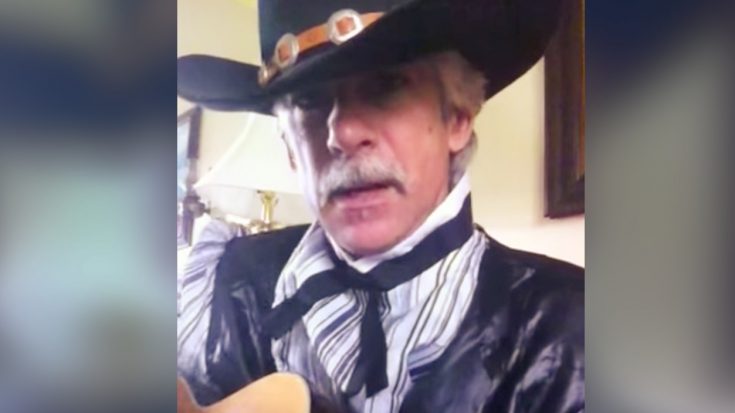 As the star of Tombstone, The Ranch, and Road House, Sam Elliot is one of the most recognizable actors in the world.

The 75-year-old actor has also made many a fan fall head over heels for him. Known for both his dashing good looks and husky voice, he’s definitely a double threat when it comes to attractiveness.

Renewed interest in Elliott has sparked since he took on a role in the latest remake of A Star is Born. He plays Bobby Maine in the film, the brother and manager to lead character Jackson Maine, played by Bradley Cooper. Lady Gaga plays the female lead, Ally.

When the stars of the movie stopped by The Late Show with Stephen Colbert, Elliott took part in a fun activity. Putting his signature voice to use, he read some of the lyrics to Lady Gaga’s songs.

The result was surprisingly swoon-worthy.

While no one will ever be able to replicate Elliott’s voice or looks, many have tried. And some have done a pretty good job!

One Elliott look-alike can even sing, and decided to film a video of himself doing so to send to his girlfriend, who was out of town at the time. Dressed in a getup resembling that of Elliott’s Tombstone character, the man stared straight into the camera, tipped his hat, and said just two words that will make your heart skip a beat.

The song this look-alike chose to sing was “Always On My Mind.” Performed by a number of artists over the years, some of the most well-known renditions were recorded by Willie Nelson and Elvis Presley.

Written by Wayne Carson, Johnny Christopher, and Mark James, the song has the narrator reflecting on how they didn’t treat a past lover as well as they should have. Now that they are apart, the narrator still can’t help but think of their love, and wants them to know they were always on their mind.

Never has a song about heartache sounded (or looked) as good as it does from this Elliott look-alike. Your heart will flutter as you watch him sing the oh-so-familiar words to the song country fans have been listening to for decades.

But no moment in the clip is better than the end, when the man looks right at the camera and flashes a huge smile. He then addresses his girlfriend, saying “Love you sweetie,” and blows her a big kiss.

If that doesn’t make y’all weak in the knees, we don’t know what will!

After this, the only thing we need is to hear the real Elliott sing “Always On My Mind.” Bet y’all would enjoy that!