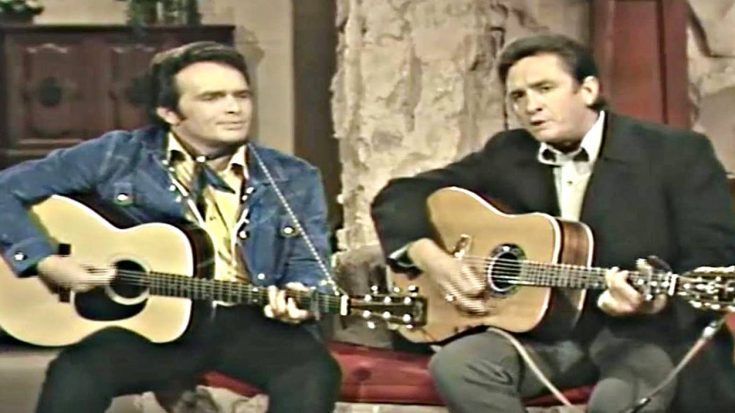 If you are a country music fan – you’ve heard Merle Haggard‘s “Sing Me Back Home.” But what not every outlaw enthusiast knows is that he teamed up with Johnny Cash for a rare duet of the timeless jam in 1969.

When The Hag wrote the song in 1967, he had no idea how big it would become. The tune is based around his own experience as an inmate in San Quentin State Prison. The lyrics touch on his relationship with two prisoners he met while serving his time. Sadly, both of the men were sentenced to death.

The song itself is slightly morbid, as it tells the tale of a singer who is asked to perform one last time for an inmate being walked to death. The condemned friend requests a song that he used to hear the choir sing. The tune was said to remind him of happier days – of the warmth in his mother’s voice back when the future was full of hope instead of bleak truths.

The Man In Black

When choosing a partner to sing the painful song with him, Haggard knew the only man who could do it justice was none other than the Man In Black.

Cash never spent time in prison as Haggard did, but he often visited the prisons to inspire hope in the inmates as they passed their days in isolation. While playing at the maximum-security penitentiary, San Quentin – Cash unknowingly sparked something deep inside inmate Merle Haggard.

Haggard once told Rolling Stone about Cash’s performances saying, “He had the right attitude. He chewed gum, looked arrogant and flipped the bird to the guards—he did everything the prisoners wanted to do. He was a mean mother from the South who was there because he loved us. When he walked away, everyone in that place had become a Johnny Cash fan.”

By 1969, Haggard had been released from prison and started his own music career. Cash himself invited the former convict to sing on his variety show. The two legends gave a performance of a lifetime as Cash’s deep voice echoed Haggard’s cries to

“Make my old memories come alive/ Take me away and turn back the years/ Sing me back home before I die.”

You can watch the iconic artists come together and sing of the harrowing tale in Haggard’s bone-chilling tune below.