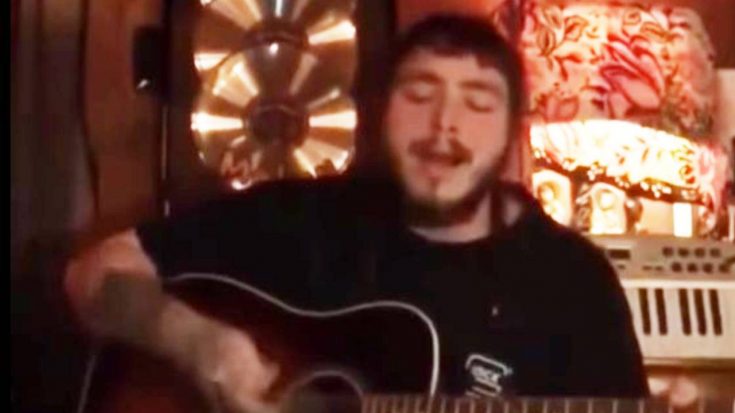 In 1950, Hank Williams recorded “There’s A Tear In My Beer,” but he never actually released it. He passed away just a few years later. 35 years after his death, his only son, Hank Williams Jr., recorded a duet version of the song with his father’s original recording.

Hank Sr. played the guitar as the sole instrument, so Hank Jr. and his band added more vocals and instruments in 1988 and released it in early 1989. When it came time to film the music video, they combined old footage of Hank Sr. and merged that footage with Hank Jr. recording the song. It went on to win Video of the Year at the CMA Awards and the ACM Awards.

Most recently, he sang a cover of Brad Paisley’s “I’m Gonna Miss Her” for the virtual Texas benefit concert “We’re Texas” hosted by Matthew McConoughey.

Now, we’ve uncovered a video of Post Malone covering “There’s A Tear In My Bear” by Hank Williams and Hank William Jr.! The video looks like it was in a house with his friends. A bottle of Tito’s vodka and a huge Bud Light can be seen on the table in front of him.

Strumming a guitar and rocking his once-signature braids and beard, “Posty” puts his own spin on the classic song, which had fans say he should perform with Hank Jr. one day!

What do you think of his cover? Watch it below.