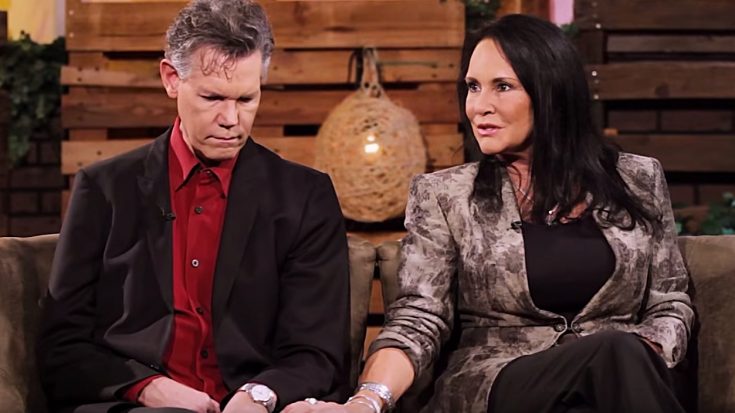 At the height of his career, Randy Travis was one of the top-selling country artists and had carefully built a career filled with legendary moments and unforgettable songs. But today, his life is not the same…

There isn’t a soul out there that would deny that Randy Travis is an absolute country legend with a voice so recognizable and talented that almost anyone would have leapt at the opportunity to sing with him.

With 58 singles and over 20 studio albums, Randy’s voice within the world of country music rang loud and clear – and helped bring him to the absolute height of fame, fortune, and stardom.

By the time the 1990s came around, Randy had already recorded and released half a dozen albums, with all of them being certified Platinum in the United States and he had sold millions of records worldwide. A bonafide star and country music icon, he had truly stolen America’s heart.

At that time, Randy had been married to his now-ex-wife Lib Hatcher since they met at the start of his career in the late 1970s. She became his manager and handled a lot of his finances.

In a candid new interview, Randy, his wife Mary, and author Ken Abraham speak openly about Randy’s dire financial situation and how things went from incredible wealth and stardom – to a much different landscape today.

🎉🎉🎉 #Repost @opry ・・・ Our love is deeper than the holler. ♥️ Can’t wait to celebrate @therandytravis’ 60th birthday on the Saturday Night #Opry! #TBT

Abraham is the co-author of Randy Travis’ new autobiographical memoir, Forever and Ever, Amen: A Memoir of Music, faith, and Braving the Storms of Life that was released on May 14th, 2019.

In the last 100-plus pages of the memoir, it details the financial situation Randy and his wife are facing and they expanded upon it much more in a recent interview with Taste of Country.

The book explains from Randy’s point of view, the utter shock and devastation he and Mary experienced when they learned he did not have disability insurance on his iconic voice – a unique type of insurance offered by Lloyds of London who will insure almost anything.

DON’T FORGET! 🎉 Order a copy of “Forever and Ever, Amen” before May 21 and get the special bonus offer: the first 3 chapters of the book! 📖 📖 📖 www.ForeverAndEverAmenBook.com for more info!!!!

After Randy’s 2013 stroke, he had significant troubles with his nervous system and damage from the stroke made him unable to sing as he once did. This would have been covered by the policy – but, somehow, the policy didn’t exist.

Beyond the missing insurance policy, he had been led to believe had been taken out and paid for, the couple learned that the royalty checks they had been expecting to receive never actually came. This was due to advance draws against the royalties that had yet to be fully recouped. In a final blow to his financial stability, money that was supposed to be held in investment accounts was either no longer able to be accessed…or had vanished.

“Hopefully the book will help. A movie may help, as well,” Abraham said. “I think that is part of the story of Randy Travis that a lot of people don’t know. They think that just because Randy has had such great success in the music business … that he’s just rolling in money and never has to have a concern. That’s just not the way the music business works.”

In the book he wrote with Randy, the end of it stops right in March 2018 – where he and wife Mary had taken his ex-wife Lib Hatcher to court trying to get a deposition on the record so that facts could be sorted out and the situation handled in whatever way they could.

Nobody is being blamed directly for the financial hard times Travis has encountered, and in the book, he takes blame himself – expressing that he should not have allowed others to make major financial decisions on his behalf without him reading what he was signing.

Together, they call it “willful disregard or mishandling of my fiduciary affairs.”

In the end, Mary explained to Taste of Country that they have admitted their own faults – and hope that others find the strength to do the same.

“We’ve admitted where we were wrong and we hope that they (those who may take exception to their characterization in this book) may do the same thing – because there is so much freedom in knowing that I forgive and I’ve been forgiven.”

Watch their in-depth interview with Taste of Country below.