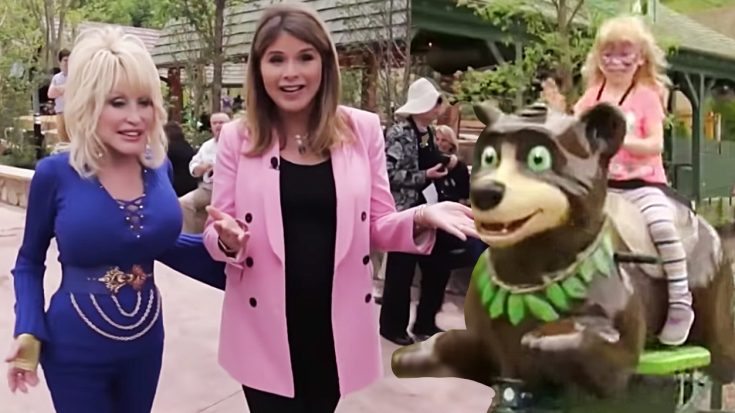 For the past 33 years, Dolly Parton‘s Dollywood theme park has been bringing happiness to kids and families across the country. With endless adventure and fun offered from the moment you step through the butterfly gates, it’s no wonder it has become the biggest ticketed tourist attraction in Tennessee.

When the park went under a $37 million expansion – The TODAY Show knew they had to get the inside scoop from the queen herself.

In October of 2017, work began on a five-acre expansion that would be called “Wildwood Grove” in Dollywood. The expansion added 11 new experiences to the park, which are as follows.

Treetop Tower – A leaf canopy that soars through the sky.

Sycamore Swing – A colossal swing that the whole family can fit into.

Frogs & Fireflies – A roundabout ride that takes you around the lily pad.

Benjamin Bear – Take a ride on the back of a black bear that glides through the woods.

Mad Mockingbird – A flying scooter that is controlled by the rider.

The Dragonflier –  The largest and fastest family coaster.

Wildwood Tree – This tree is decorated in butterflies and turns into a platform for performers.

A new restaurant, Till & Harvest was also added to the exciting new attraction. The restaurant will feature Mexican food and is expected to open around Memorial Day.

Dollywood’s Wildwood Grove officially opened its doors on May 10, 2019. While Parton was present for the opening day festivities, she also got together with Today Show host, Jenna Bush Hager for a little tour of the new expansion.

Heaven is spending the morning with the unique light that is @dollyparton! ????

Parton took Hager to the Benjamin Bear ride where kids of all ages took their turns riding the friendly black bears. Next, the two sat down for an interview where Parton explained where her inspiration for the park came from – her hometown roots. Parton hopes that guests’ only take-away from Dollywood is that they leave feeling happy.

You can watch the full video below.