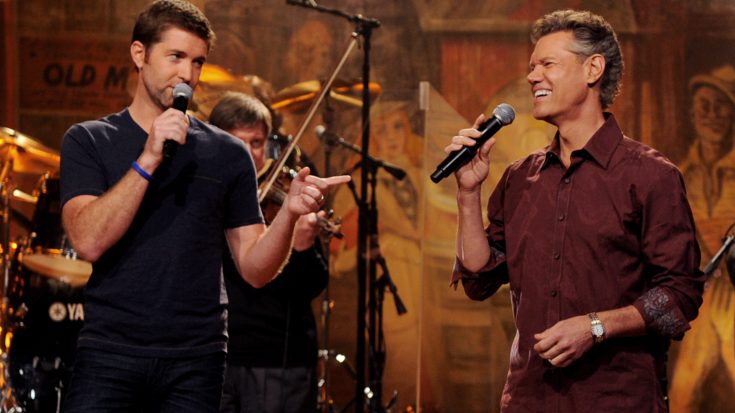 It’s the flirtatious melody that has been sparking flames amongst lovers for over a decade. In a live studio performance put on by country music legend Randy Travis and country music heartthrob Josh Turner, the audience got a surprise they weren’t prepared for.

The 2005 hit song “Your Man” went flying off the charts after its release. Being one of Turner’s first #1 hits on the US Billboard Hot Country Songs, it’s no wonder the song still remains as one of his greatest. From his deep baritone voice to his charming looks, he’ll leave you wishing he was “Your Man.”

The following year of the song’s popular release, two of country’s favorite stars came together for a rendition. The breathtaking performance took place for the new series CMT Cross Country. After watching this performance, there is no question that the “Forever And Ever, Amen” singer can use his golden pipes in any tune.

The show itself was a series of covers and duets between some of the two artists’ greatest hits. Aside from “Your Man,” the duo stunned the audience with “Three Wooden Crosses” and “Long Black Train.”

Playing in perfect harmony, the two serenaded the viewers from the very beginning but right before the chorus, they got a treat. It was to no surprise that Turner has a way of melting any audiences’ hearts with his deep vocals but when Travis opened his mouth… the crowd was shocked. Travis hit the low range with flying color sounding almost identical to young Turner’s original vocals on the track.

Loud cheers and claps filled the room followed by uncontrollable smiles exchanged between the singers. The excitement both between the singers and the crowd continued throughout the duration of the song. Travis and Turner intertwined their vocals between different verses for a timeless performance.

Watch below as Randy Travis and Josh Turner come together for a charming cover of “Your Man.”