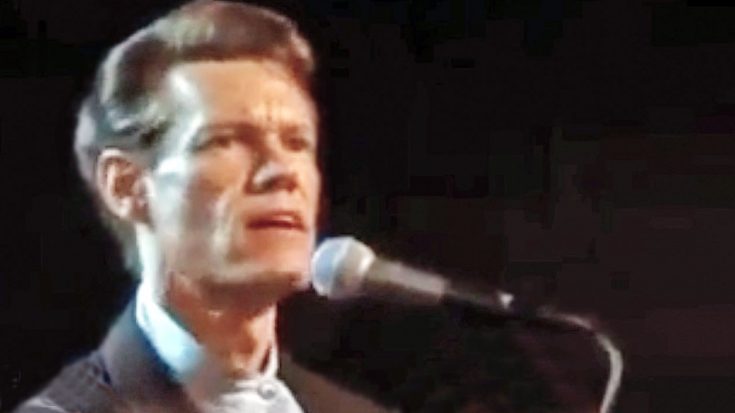 In country music, it isn’t the least bit unusual for an artist to decide to record a gospel album at some point in their career. Gospel and country already share so much in common as it is, so the transition between the two genres is an easy one.

Many country artists have offered their voices to treasured gospel songs and classic hymns. One such artist is Randy Travis, who has recorded multiple gospel albums throughout his career.

Travis released his third gospel album in 2003, which was titled Worship & Faith.

The album contained an impressive total of 20 tracks, all of which were covers of traditional gospel songs. Just a short selection of the tracks on the album include “How Great Thou Art,” “I’ll Fly Away,” and “Blessed Assurance.”

One Of His Most Meaningful Tracks

Another one of the tracks that Travis featured on Worship & Faith was the beloved gospel song, “Just a Closer Walk with Thee.”

The tune has been covered numerous times since it originated, with artists such as Merle Haggard, Tammy Wynette, and Charley Pride all recording renditions.

Travis’ version of “Just a Closer Walk with Thee” is one of the most well-known in country music. It’s easy to see why once you watch him perform the song live, just as he did in the clip featured below.

With a small band behind him, Travis went up on stage and let the music take control. His unmistakable baritone voice flowed effortlessly through the song, and he delivered each note with ease.

You can tell that Travis was totally in touch with the music as he sang “Just a Closer Walk with Thee” that day. That strong connection created a peaceful feeling in the room that also translates through the screen as you watch him sing below.

Videos like this prove exactly why Travis is considered to be a country music icon. There’s no one else out there that can sing quite like he can. He’s truly one in a million.