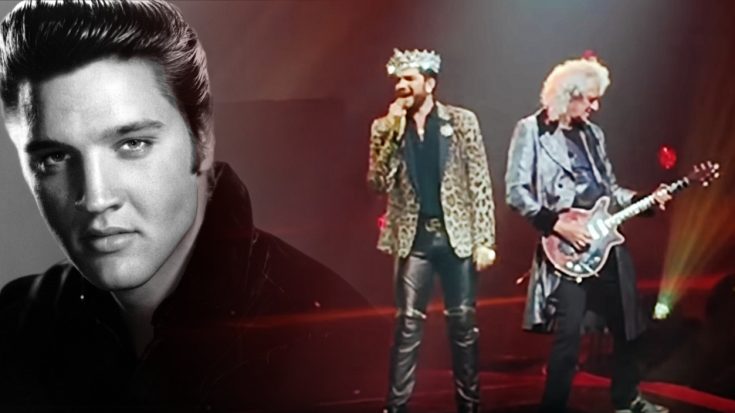 An unprecedented event in Elvis Presley‘s famous stomping ground just set this career mega-hit on fire – and took the Vegas Strip with it!

Taking to the stage for their epic limited-run residency in Las Vegas, hard-rocking powerhouse band Queen – joined by their new frontman (and American Idol star) Adam Lambert – paid homage to The King during the opening night of their new show.

Scenes from the Queen + Adam Lambert concert. Listening to all these great songs was a walk down memory lane. @QueenWillRock @adamlambert @Vegas @ParkTheatre #travelmore pic.twitter.com/vBUrEqTGFV

Queen and Adam Lambert will be performing regularly in Vegas for their limited-engagement event that runs from September 1st – 22nd, 2018.

But for a show during their debut weekend, this iconic band and remarkable vocalist paid Elvis Presley some respect by honoring him in song – and they truly made headlines with this fiery, amped-up rendition of his hit.

Singing “Heartbreak Hotel” – one of Presley’s classics from 1956, Queen and Lambert rocked the stage at Park Theater MGM in a way that nobody else has!

Playing a full set of classic hits and revamped tunes, this new show is definitely a must watch for anyone headed to Las Vegas soon.

“Adam has a real gift from God,” Queen member Brian May said before the show opened. “It’s a voice in a billion, nobody has that range, nobody that I’ve ever worked with, not just the range but the quality throughout the range. I’ve seen Adam develop just like I watched Freddie develop.”

Check out this fiery, powerhouse hit remade by Queen and Adam Lambert in the video below – and share your thoughts with us in the comments!