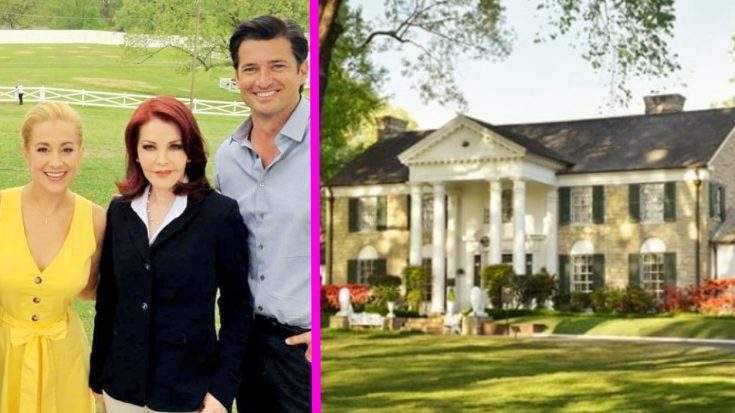 Beloved Christmas Film Gets A Sequel

Known for its Christmas movies, The Hallmark Channel had no shortage of films to share during the holiday season in 2018. But one film captivated viewers more than any other, and it happened to share some strong ties to country music.

Titled Christmas at Graceland, the movie was actually filmed at Elvis Presley‘s famous Graceland estate in Memphis, Tennessee. The country music connection was made stronger due to the fact that country singer Kellie Pickler was cast in the lead role.

Since the film was so beloved, it was quickly announced that a sequel was in the works.

A Special Guest Makes An Appearance

Titled Wedding at Graceland, the film is set to debut sometime in June, and we already can’t wait to see it!

Filming started in April, and so far all we know is that Kellie’s character (Laurel) and her love interest are busy planning their wedding, but face a dilemma in the process.

Feeling cute. Maybe we should be in a Hallmark movie?

The @hallmarkchannel is in the Town of #Collierville filming a few scenes for "Wedding at Graceland," set to debut June 1st. The movie is a sequel to “Christmas at Graceland” which was the number one Hallmark Movie in 2018. pic.twitter.com/HrH53R9aWH

In mid-April, Us Weekly revealed that Elvis’ ex-wife, Priscilla Presley, would be making a cameo appearance in the film. The publication wrote that she “will share a fond memory of her May 1967 wedding to the King of Rock and Roll” in the movie.

Priscilla herself confirmed her involvement in the film when she shared a behind-the-scenes photo from her day on set. The photo shows her standing next to Kellie and her co-star Wes Brown, who plays her love interest (Clay).

Just finished on Friday a cameo on the Hallmark Channel, Wedding at Graceland, the sequel to the highest rating Hallmark…

In the caption, Priscilla shared a little secret about where the movie is filming on the Graceland Estate, saying it was “Filmed at Graceland’s own Chapel in the Woods.”

The Chapel that Priscilla is referring to is Graceland’s own wedding venue, which was part of the property for 18 years before undergoing a total makeover and reopening in the summer of 2018. A stunning work of architectural art, the Chapel is the perfect place to film a movie such as Wedding at Graceland.

Now that Priscilla filled us in on where the nuptials are sure to take place in Wedding at Graceland, we’re more anxious to see the movie than we were before! In the meantime, we’ll just have to enjoy the original film.

Watch one of the musical performances from Christmas at Graceland below. Hopefully Kellie will sing in the sequel as well!