Pentatonix Creates A Cappella Version Of Faith Hill’s “Where Are You, Christmas?” 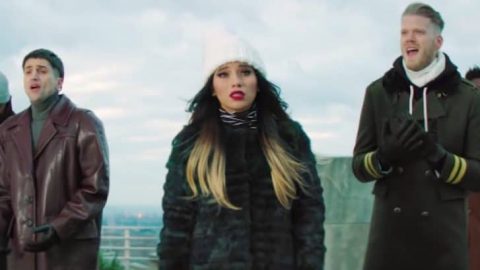 Many of the Christmas tunes you’ve grown up listening to are multiple decades old, with most of them being older than some of you reading this right now. Others are even older than that, dating back centuries rather than decades.

Because these songs have been a traditional part of the holiday season for years, it makes it hard for new tunes to find their way into the flow. But one newer track accomplished that task, and it is now a treasured part of the Christmas season.

That song is Faith Hill‘s “Where Are You, Christmas?”

The song was co-written by pop superstar Mariah Carey, James Horner, and Will Jennings for the 2000 film How the Grinch Stole Christmas. Just six years prior, Carey released her famous song “All I Want for Christmas Is You,” which she also co-wrote.

Today, that song is the 12th best-selling single of all time. It was reported by The Economist the song earned $60 million in royalties as of 2017.

Since Carey co-wrote “Where Are You, Christmas?” as well, it was the original intention to have her record the song after “All I Want for Christmas Is You”  was such a smash success. But her original recording of the former mentioned song was never released, as she entered a legal case with her ex-husband and former mentor, Tommy Mottola.

As a result, the song was given to Hill. Things turned out alright for all involved, because as of 2016, Billboard had it ranked as the seventh best-selling digital Christmas/holiday single of all time.

It was also performed in How the Grinch Stole Christmas by Taylor Momsen, who played Cindy Lou Who.

Christmas Isn’t Complete Without A Little A Cappella

The song has been covered many times, with one of the most unique renditions coming from a cappella group and The Sing-Off winners, Pentatonix. Every holiday season, the group pleases fans with their special twists on some of the most iconic Christmas songs of all time.

Many feel that Christmas wouldn’t be complete without listening to some Pentatonix tunes, and the numbers prove it. Many of the group’s top ten highest-viewed videos on YouTube are Christmas-themed covers, with their all-time best video being for their rendition of Leonard Cohen‘s “Hallelujah.”

So based on how gorgeous Pentatonix’s previous Christmas covers have been, it goes without saying that their rendition of “Where Are You, Christmas?” is just as good.

The group opted to keep the setting simple for the video, with all five members standing on top of a high-rise building in the middle of a city. Various members take turns singing, with each one of them bringing a new sense of power to the song.

Of course, the best moments come when everyone sings together and their voices blend to create a chilling sound. Words can only do their performance so much justice, so why don’t you just check it out below?

What a wonderful Christmas gift Pentatonix has given the world by recording this beloved song.