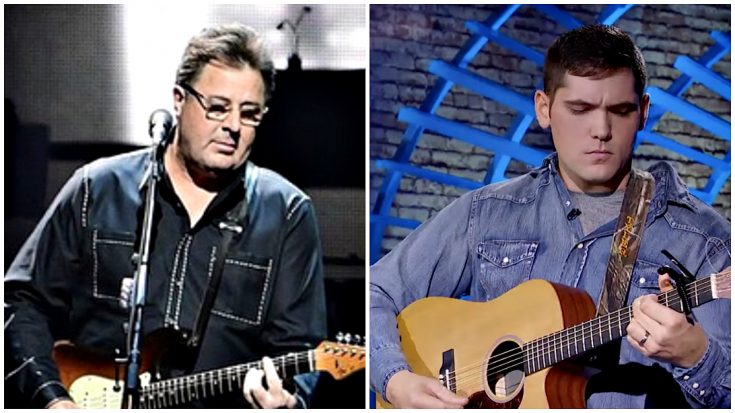 American Idol is back! The iconic reality singing competition that gave us superstars like Kelly Clarkson, Scotty McCreery and Carrie Underwood made it’s return to television Monday night (March 3) and it has us excited for what the season is going to bring!

The Idol season premiere did not disappoint when it came to country performances. One of the best came from Tyler Mitchell, a 26-year-old oilfield worker from Louisiana. When asked why he wanted to audition for the show, Mitchell replied, “I’m here because I’ve been told I have a god-given talent and I’d like to show it off.” And he did not disappoint.

The 6-foot 4-inch singer stood nervously in front of the judges holding a guitar. He admitted that he didn’t perform in public much because he lacked confidence, but his nervousness was completely unwarranted. As soon as Mitchell began to play his guitar, he came alive and delivered a flawless rendition of Vince’s Gill’s 1994 hit, “Whenever You Come Around.”

Judge Katy Perry asked why he’s fearful about performing, Mitchell replied with an answer that all performers can relate to….he has a fear of messing up. But, the judges put his mind at ease by admitting that they had all done it. Luke Bryan had some words of advice for the talented vocalist. “We don’t need to tell you anything. You just be you,” Luke said. “Smile through the awkward times and America will love you through it all.“

America agreed! Twitter was alight with compliments for the handsome oilfield worker.

Finally, #AmericanIdol … someone who has BIG talent. The guy who sang the Vince Gill song was good, but THIS girl is big talent.

Not sure what just happened. Flippin' thru, American Idol on. Few minutes in and I'm BALLING, some guy named Tyler Mitchell singing Vince Gill. Not a country, Vince, or really AI fan….but just converted! #AmericanIdol #SHEILA (southern for Oh, $&^!)

It takes a lot to do justice to Vince Gill! I had to watch it twice! So good! #AmericanIdol

To the guy that just sang Vince Gill on American Idol, idk like, marry me or something?

Do you agree? Let us know what you thought about Tyler Mitchell’s American Idol audition in the comments.