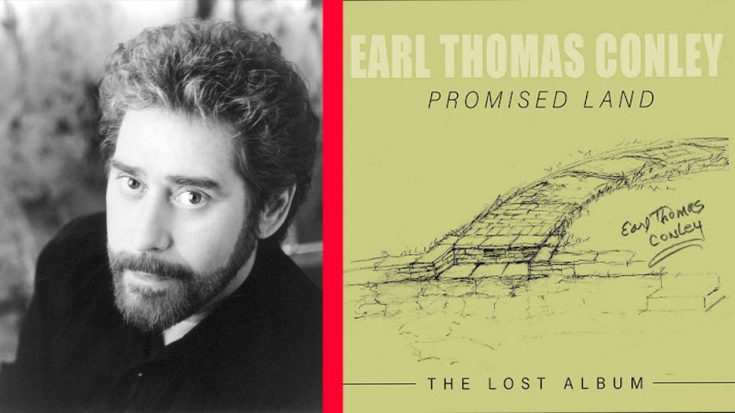 On Friday, September 25, 2020, BFD / Audium Nashville will release Earl Thomas Conley – Promised Land: The Lost Album, a compilation of a dozen tunes originally recorded by Conley in 2000 and 2001.

Conley, who had 18 number one hits and influenced dozens of artists died on April 10, 2019, at the age of 77. As an extremely talented songwriter, he wrote/co-wrote all twelve Promised Land tracks in the early and mid ‘90s. During that time, he recorded a few of the songs as demos but those particular recordings were never released. Over two decades later, the songs have been resurrected and will be available for all to hear.

Earl Thomas Conley was a country music singer-songwriter. Between 1980 and 2003, he recorded ten hit studio albums. He was born October 17th, 1941 and passed away April 10th, 2019. Many DJ's and folks in the recording industry nicknamed him ETC. Earl's discogrphy includes a long string of #1's in the 80's including " Somewhere Between Right & Wrong ", " Don't Make It Easy For Me ", " Angel In Disguise ", " Holding Her & Lovin' You ", " Honor Bound ", " That Was A Close One " & What I'd Say ". Conley was nominated for many awards in his professional music career however, rarely winning. In my opinion, his music was underated. Earl continued to release hits until the early 90's and is one of the most well deserving artist in any genre. In 1986, Conley was credited with breaking down country music barriers in his duet with pop/R&B singer Anita Pointer of the  Pointer Sisters. Their single, "Too Many Times", the title track to his 1986 album, reached #2 on the Country chart. With the song, Conley also became the only country artist to appear on Soul Train! ETC took a seven-year recording break from 1991 and 1997 due to a number of factors, including vocal problems, disenchantment with record label politics, road fatigue, and mental burnout. He began recording again in 1998. Earl will be remembered as a driving force in Country Music. Conley died on April 10, 2019, at 77 years old. written by: steve young #earlthomasconley #80scountry #80s #classiccountry #country #countrypop #rip #soultrain #countrymusic #countrymusiclover #follow #followforfollowback

“This album is long overdue as Earl had always wanted to release just one more album. The sound and composition of these songs reflect the ’90s, the time period which they were originally written. Earl Thomas Conley was an artist in every sense of the word. His talent knew no bounds, and he will remain in our hearts for the rest of our days.”

One Conley’s daughters, Erinn Scates also added that she believes Promised Land is one of her father’s most creative projects.

“To his loyal fans, thank you for loving him as much as we did. This last album is dedicated to you and the man who spent the last years of his life devoted to it.”

For more Earl Thomas Conley, watch the video below.