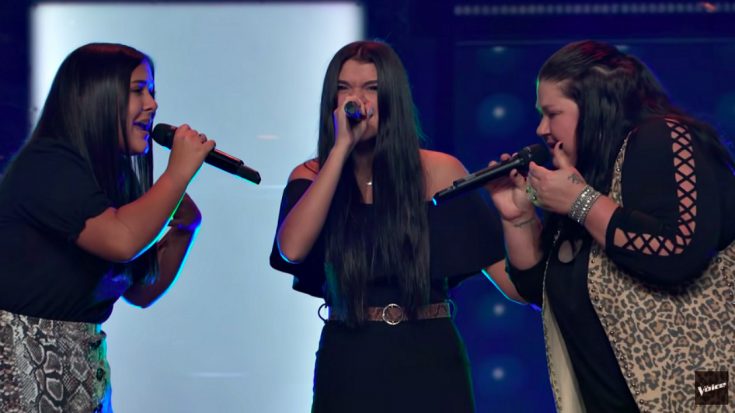 The Voice isn’t all about solo acts. In fact, over the course of the show’s 19 seasons we’ve seen numerous duos and a rare trio, but Monday night’s episode brought us the first mother-daughter trio to make an appearance on the show. And, it was “worth the wait”….literally.

The trio called Worth the Wait consists of Mia, Jacy and their mom Tara (aka “Mama T”). The Alabama-based group took the Voice stage Monday night for their Blind Audition and earned a rare 4-chair turn with all four coaches fighting for them. Coach Gwen Stefani was the first to turn her chair after hearing Mia sing the opening line to Linda Ronstadt’s hit song “When Will I Be Loved.” Her surprise was evident as she saw three people on stage when she turned.

As soon as Jacy and Tara joined with harmonies, the three remaining judges turned their chairs and were entranced by the magical harmonies that the family group brought to the stage. Coach Blake Shelton even granted them a standing ovation following their performance.

Gwen Stefani was the first to try to encourage the trio to join her team and she pulled out all the stops. After saying that her fiance, Blake Shelton, was “burned out” after 19 seasons of The Voice, she played a video of Blake’s fellow country star Trace Adkins who went to bat for her.

“I believe that every person is allotted a certain amount of good luck in his or her life,” Trace said. “And Blake, as evidenced by his girlfriend, has used his up completely. I’m just sayin’.”

The comments from Adkins drew laughs from the judges, and a comment of “What an idiot” from Shelton himself. But, he fought hard saying that the group’s name was perfect because he had just enough spots left on his team for them.

“I have one spot left on my team and I’ve been sitting here waiting for whatever that’s gonna be,” the veteran coach said.

Despite great arguments from Kelly Clarkson and John Legend, Worth The Wait chose Blake Shelton as their coach.

We are OVERWHELMED with LOVE!! Thank you all SO SO much for all the support you have shown us!! I can promise it doesn’t go unnoticed. Thank you @nbcthevoice for giving us this opportunity!! @gwenstefani @johnlegend @kellyclarkson @blakeshelton thank YOU guys for being so amazing and choosing US!! We love you!! We are so excited to be on TEAM BLAKE!! LET’S DO THIS THANG @blakeshelton

Hear Worth The Wait perform “When Will I Be Loved” below. And check out their Instagram page here to hear more impressive covers from the trio.