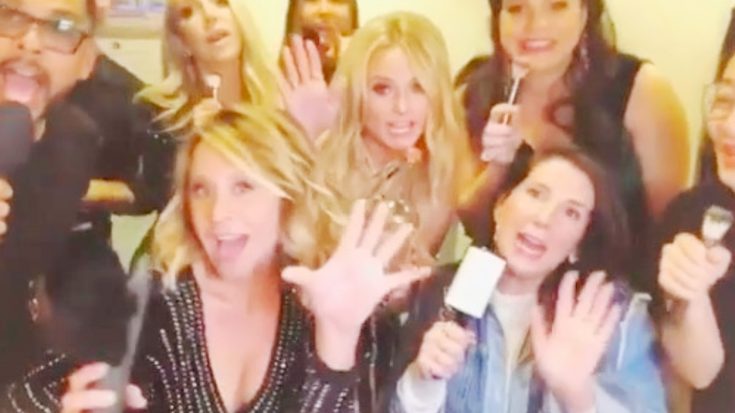 Even if you’ve never seen the musical or movie Grease before, its music is something you’re likely still familiar with. One song in particular is so undeniably catchy, that you’ll find yourself singing it for days after hearing it only once.

That song is “You’re the One That I Want.”

In the movie, the song is featured at the end, when Sandy (played by actress and country singer Olivia Newton-John) and Danny (played by John Travolta) reunite at the carnival after their high school graduation.

Anyone who has heard the song before knows that it’s nearly impossible not to jam out to it whenever it plays. All you need to hear is “I’ve got chills…” before you start singing along at the top of your lungs.

It turns out that even major country stars like Miranda Lambert can’t resist the allure of this popular Grease tune.

While hanging at the CMT Artists of the Year event in 2018, Lambert and a few of her pals (including her Pistol Annies bandmates), got together for a little backstage performance. The sing-along was one of Lambert’s signature “glam jams,” which she films from time to time with members of her team.

As you can see, Lambert and her team use whatever nearby objects the can find as makeshift microphones. Like in the “Bad Blood” jam for example, Lambert sang into a curl iron while her friends used a lint roller and some makeup brushes.

But Lambert had to get even more creative for her “You’re the One That I Want” glam jam. You’ll be crackin’ up when you see what she used as her “microphone”…a bottle of wine!

Most of her friends sang into makeup and hair brushes, and the lint roller made a grand return once again. Though there was one person left with nothing to sing into except for a fuzzy slipper!

You can tune in to the clip below to watch Lambert’s fun and sassy glam jam with her pals.

It only seems fitting for them to rock out to a song made famous by female country star, since the night was all about celebrating women!