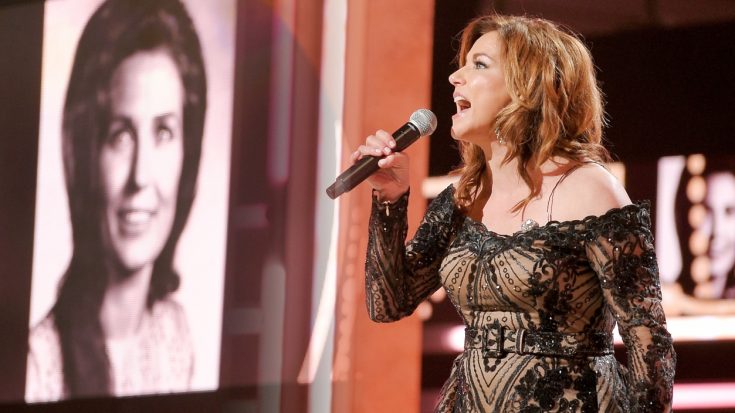 Every year, CMT chooses a handful of country stars to honor who have made an impact on the genre, and this year they selected all women. Carrie Underwood, Miranda Lambert, Kelsea Ballerini, Maren Morris, Little Big Town‘s Karen Fairchild and Kimberly Schlapman, and Lady Antebellum‘s Hillary Scott were chosen as this year’s honorees, with Loretta Lynn being awarded the Artist of a Lifetime award.

Lynn planned on attending the awards show, but backed out just a few hours before due to illness.

“Leave it to me to go and get sick on the very night all my friends are getting together to honor me at the CMT Award Show as their Artist of a Lifetime. I can’t believe that I’m not gonna be there tonight in person, but I am watching and I’m there in spirit!” she wrote on Facebook.

Thankfully she has a few good friends in country music who were willing to step up and pay tribute to her on her big night! One of those people was Sissy Spacek, who portrayed Lynn in the 1980 film Coal Miner’s Daughter.

Accepting Lynn’s Artist of a Lifetime award on her behalf, Spacek said, “I loved playing Loretta in Coal Miner’s Daughter. I just loved being her. I had the band, I had the bus, I had the clothes. But I think we can all agree, there’s only one Loretta Lynn. She’s so sorry she couldn’t be here tonight. She’s a little under the weather. I saw her earlier today, and she was so excited about this award.”

After Spacek’s emotional speech, Martina McBride appeared on stage to honor Lynn with one of her biggest hits, “You Ain’t Woman Enough (To Take My Man).” She channeled her inner Coal Miner’s Daughter with a floor-length Loretta-inspired gown and got country stars like Sara Evans, Carrie Underwood and Kelsea Ballerini swaying and clapping along to the beat. After singing the final note, the crowd erupted in applause, knowing that Loretta would be proud!