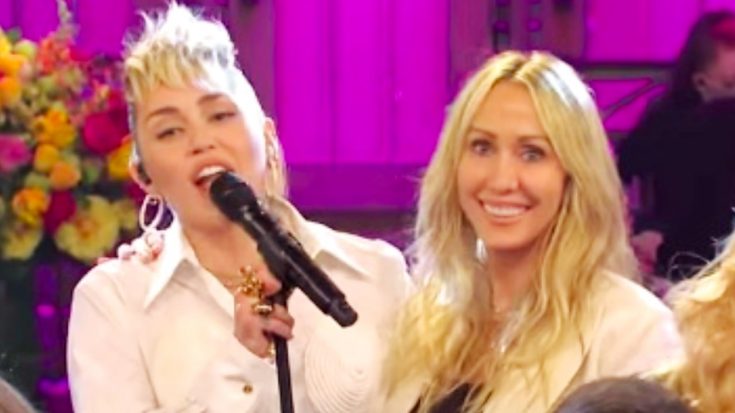 In 1992, Dolly Parton toured with a rising star in country music at the time…Billy Ray Cyrus. He released his debut single “Achy Breaky Heart” earlier that year, which became an instant hit.

Dolly and Billy Ray became close friends on tour. So close, that when Billy Ray had a baby girl in November 1992, he asked Dolly to be her godmother.

That baby girl was Miley Cyrus, who went on to follow in her father’s musical footsteps. She got her start as the star of the Disney Channel series Hannah Montana.

Dolly appeared on the show a few times as Miley’s “Aunt Dolly.”

Remember when Dolly Parton was on Hannah Montana? ? pic.twitter.com/m6bMnyeWwP

Miley has maintained a close relationship with her godmother. She often covers her songs, and has performed alongside her a number of times.

So it made perfect sense why Miley turned to one of Dolly’s songs when she was chosen as the musical guest for the Mother’s Day edition of Saturday Night Live.

The song has been covered many times since, with some notable renditions being by Glen Campbell and the Wailin’ Jennys.

Now, Miley can add her name to the list of artists who have famously covered “Light of a Clear Blue Morning.”

Miley delivered her version of the song during the SNL cold open. She performed alongside the show’s cast members, who welcomed their mothers to the stage to honor them during the performance.

The cast members stepped up to introduce their moms, and they shared plenty of sweet and funny moments. At the end of the performance, Miley was joined by her own mother, Tish.

Of course, Miley made sure to recognize her godmother as well. “Happy Mother’s day to my godmother Dolly Parton and to my mom Tish,” she said when she finished singing.

Tune in below to watch Miley sing “Light of a Clear Blue Morning.” It was so sweet of her to honor Dolly with her performance!