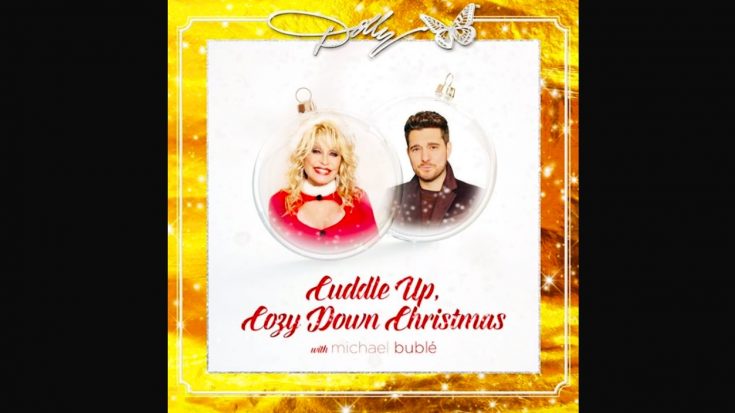 On October 2, Dolly Parton released her first new Christmas record in 30 years. Titled A Holly Dolly Christmas, the album is packed full of collaborations, with some of the featured artists being Miley Cyrus, Willie Nelson, and Parton’s younger brother, Randy.

Outside of the country realm, Parton also recorded a duet with Michael Bublé. In addition to being known for songs such as “Everything” and “I Just Haven’t Met You Yet,” Bublé’s covers of Christmas classics are some of the most beloved holiday tunes out there.

So it was a guaranteed recipe for success when Parton and Bublé came together to record a track for A Holly Dolly Christmas.

Instead of performing an old Christmas song, Parton and Bublé collaborated on an original piece Parton wrote entirely on her own. It’s titled “Cuddle Up, Cozy Down Christmas.”

It was an incredible honor to sing on @dollyparton’s new song “Cuddle Up, Cozy Down Christmas”! I hope you like it! Link in bio. #AHollyDollyChristmas

The romantic track has Parton and Bublé singing about how they want to snuggle up together while snow blows around outside:

As they sing at one point in the song, “The snow is fallin’, passion’s callin’, A glass of wine or two. I want a cuddle up, cozy down Christmas with you.“

Unfortunately, there isn’t any footage of Parton and Bublé singing “Cuddle Up, Cozy Down Christmas” together live. But we do have the official audio clip, and you can check it out below.

It may only be October, but listening to this song has already put us in the Christmas spirit!