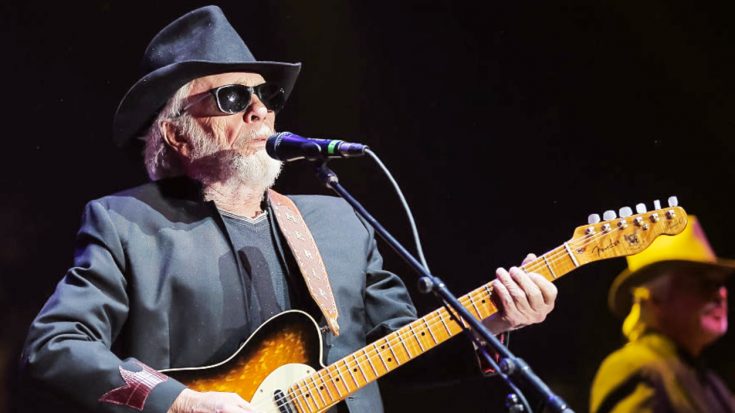 While the Roger Miller tribute album King of the Road: A Tribute to Roger Miller was just released on August 31, the artists involved in its creation started work on it years ago. That’s the reason why we’re now able to hear a new song from the late Merle Haggard.

On April 6, 2016, Merle passed away due to complications from pneumonia. His death left the country music world in mourning, as artists and fans came to realize they’d never hear “The Hag” sing again.

Or so they thought….

First, A Bit Of History

Ten years before his death, Roger Miller paired up with another one of country music’s leading artists, Willie Nelson, to record a an album titled Old Friends. The album’s title track was a collaborative effort between Roger, Willie, and fellow country music icon Ray Price.

With so much star power on one song, “Old Friends” was a guaranteed recipe for success. Sure enough, the song managed to crack the Top 20 on the Billboard Hot Country Songs chart following its release as a single.

After Roger passed away, Willie and Ray came together to remember him by singing “Old Friends” as a duo. But not before they played a clip of Roger singing the song years ago with another one of their friends, Waylon Jennings.

The great Ray Price passed away in 2013, leaving Willie as the only living singer to offer his voice to the original rendition of “Old Friends.”

When it came time to find tracks for the King of the Road tribute album to Roger, it was a no-brainer to include “Old Friends.” But with Ray and Roger gone, the question was if Willie would still be willing to sing the song.

It turns out that he was, but he needed two new old friends to help him out. Roger’s son, Dean Miller, who co-produced the album, said he knew exactly who to call on:

“Ray is gone, and my dad is gone, so I thought, ‘Who else fits in that Mount Rushmore?‘” Dean said in a press release. “Well, Merle and Kris [Kristofferson]. They were both very close to my dad, so I pursued both of them.”

In addition to being friends with Roger, Merle and Kris were both close friends with Willie. Kris is Willie’s former Highwaymen bandmate, while Merle and Willie had recorded many duets in the past. So it came as no surprise that they willingly said “yes” when they were asked to sing “Old Friends” with him.

The trio’s collaboration was completed before Merle’s death, making it one of the last songs that “The Hag” ever recorded. It was hidden for all of this time, but now you can finally hear it, two years after he passed away.

You can listen to Willie, Merle, and Kris’ rendition of “Old Friends” in the clip below. After losing three of his friends that he recorded this with, Willie must treasure this song immensely.