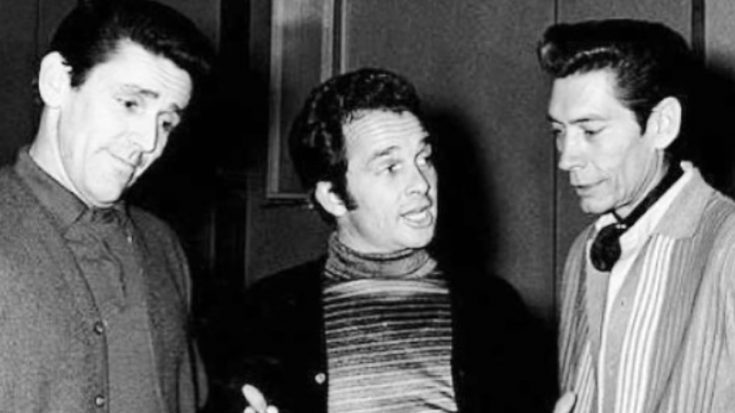 Merle Haggard was in his early twenties when someone took a chance on him and signed the former San Quinten inmate to a recording contract. That someone was Charles “Fuzzy” Owen.

Charles and his cousin, Lewis Tally, signed Merle to his first recording contract in 1962. Little did the men know at the time that Charles would go on to become Merle’s lifelong champion and friend.

As a Bakersfield native like Merle, Charles had a good feeling for the type of music he wanted to create. Charles was a musician himself, and performed at the Blackboard Cafe with his cousin Lewis long before they signed Merle.

Charles and Lewis eventually founded their record label, Tally Records. KGET states the cousins acquired the rights to what would go on to become the first hit song out of Bakersfield, “A Dear John Letter.” The song was co-written by Charles and was recorded by Ferlin Husky and Jean Shepard.

A few years after “A Dear John Letter” was released, Charles and Lewis signed Merle to his first recording contract. His popularity exploded over the course of a few years, and it wasn’t long before he was one of the most well-known artists in all of country music.

As Merle moved on throughout his career, Charles remained by his side. He became Merle’s manager, and remained with him up until Merle’s passing in 2016 at the age of 79.

On top of being Merle’s decades-long manager, KGET says Charles was his “lifelong friend and closest confidant.”

These feelings were reiterated by the team who runs Merle’s official Instagram page.

Merle’s team announced the sad news that Charles had passed away on May 11. He was 91 years old.”To all fans and friends: today Merle’s lifelong manager Charles Fuzzy Owen passed away,” read the statement from Merle’s team.

They also shared a photo of Merle with Charles, which you can see below.

To all fans and friends: today Merle's lifelong manager Charles Fuzzy Owen passed away. He managed Merle through his career. He also was the first one to record Merle. We will miss him dearly. Our thoughts and prayers go out to his family. God bless you Fuzzy!

“We will miss him dearly,” Merle’s team wrote in their statement. “Our thoughts and prayers go out to his family. God bless you Fuzzy!“

We too, join Merle’s team in praying for Charles’ family and friends during this sad time. He had such a huge impact on Merle’s career, and thus, on country music as a genre. His legacy will always live on.

Learn more about Charles by tuning in to the clip below. May he rest in peace.