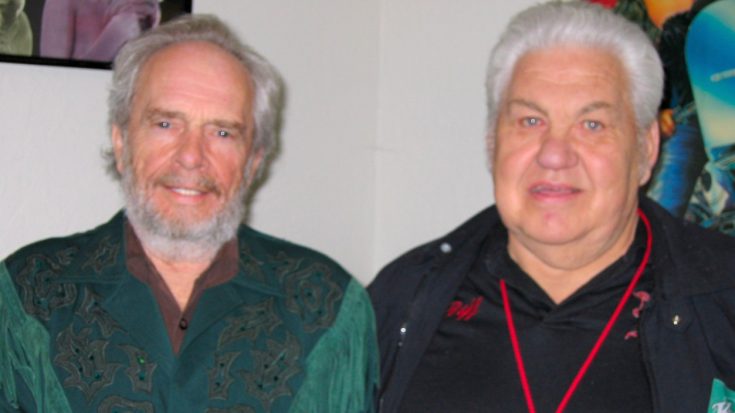 Merle Haggard and his longtime drummer Biff Adam have reunited.

Biff joined Merle’s legendary band, The Strangers, in 1970 and also served as the country legend’s bus driver and publicist for quite a while.

He can be seen in the photo below, which was shared by Merle’s son Ben Haggard back in 2011. Ben’s caption says, “Late 1980s Strangers.” Biff is sporting white hair and is standing second from the right.

In a Facebook post on Saturday night (March 7), Biff’s daughters Connie and Debbie confirmed that their father had passed away at the age of 83.

“It is with a heavy heart that I inform all of you on behalf of Connie Ishman and Debi Stalder Biff’s daughters that our beloved father passed away peacefully in his sleep this evening,” the post read. “You all were very special in many ways to him! Cherish the memories you had with him and remember him with a smile!”

They also announced plans to memorialize him later in the year. Debi will be acting as the family spokesperson and asks that all questions and comments be directed to her Facebook page here.

Biff had been having some health problems since January.

Hello Biff's friends! This is Connie and Debi his daughters! Biff has been fragile lately physically We would…

On February 13, Debi said Biff had congestive heart failure, but was improving.

This is Debi again! Biff is improving and sleeping a lot. Congestive Heart failure.

Friends have been sharing some incredible memories of Biff on social media. Check one of them below.

Thank you Jim and Linda for the memories!

Our thoughts and prayers are with Biff’s family and friends as they mourn his passing.

Watch Merle Haggard’s performance for President Reagan, exactly 38 years to the day before Biff’s passing, below. You can see Biff playing the drums. According to his daughter Debi, Biff has played for five presidents.