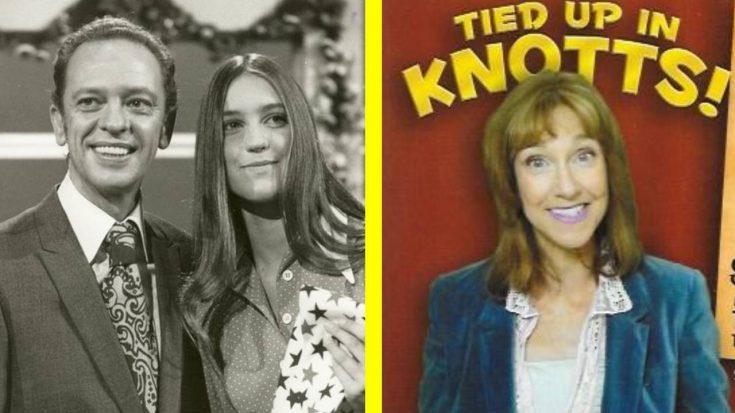 After appearing on The Andy Griffith Show as Barney Fife, Don Knotts became a household name. He went on to star in movies and television and worked all the way up until his death in 2006.

He is considered one of the greatest TV stars of all time, winning five Emmys for his role as Barney Fife. In fact, TV Guide listed him at #27 on their list of 50 Greatest TV Stars of all time list and was a major influence for many entertainers.

Not only did other actors consider him an influence on their lives and careers, but so did his daughter, Karen Knotts. Don was married three times, but only had children from his first marriage to Kathryn Metz, which was from 1947 until 1964. They had a son named Thomas and a daughter named Karen.

Don Knotts with daughter Karen on his variety show "The Don Knotts Show," which aired by NBC , 1970-71. ? pic.twitter.com/iJkZsuPcgq

Watching her father be an entertainer growing up, she had an early desire to enter the family business, show business. At first, Don wasn’t very supportive, saying it wasn’t a great path for a kid to go on, but in the end, he was her number one fan.

Do they look alike? Don Knotts' daughter Karen! Her one woman show is called Tied up in Knotts @wfaachannel8 pic.twitter.com/OIZ9sg8Yxr

She went to college at the USC School of Cinematic Arts and then began her career as a stand-up comic. Along with touring, she has also appeared as an actress in a few different projects.

Karen is also known for her one-woman show titled “Tied Up in Knotts,” which tells the story about growing up with her comedian father.

Tied Up In Knott Starring Karen Knotts, daughter of the legendary Don Knotts is coming to #WCCCD on June 22, 2018. This show is open to the public at no cost. Tickets are required and can be reserved at https://t.co/ysumDoGkvZ #WantMoreStartHere pic.twitter.com/JO7VsShbiB

She’s proud to be Don Knotts’ daughter and has traveled the world keeping his legacy alive. She’s even helped unveil statues in his honor.

Watch Karen perform comedy in the video below. We think her dad would be proud of her, don’t you?