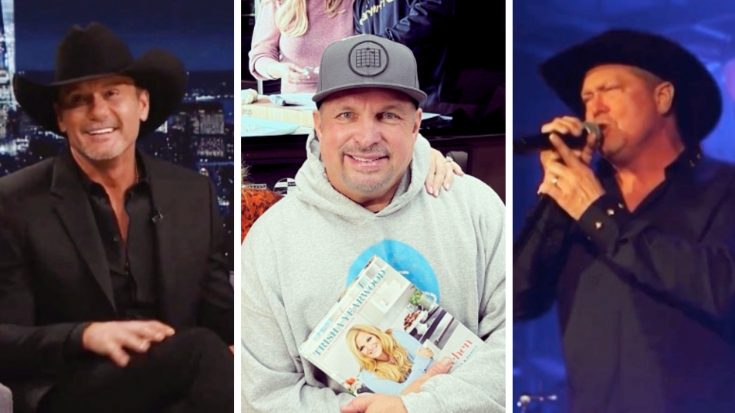 While speaking with Keith Urban on his Beyond the Influence Radio show, Tim McGraw told an interesting story about a time he served as a bridesmaid in a friend’s wedding. McGraw said this happened when he was still new to Nashville, and he had just gotten a record deal.

When he arrived in Nashville, McGraw befriended a woman named Tammy Rose. He said Rose “sort of took new artists under their wing when they first moved to town.” He was one of those artists.

Over time, Rose had also developed close friendships with two other country singers: Garth Brooks and Tracy Lawrence. So when she got married, she asked McGraw, Brooks, and Lawrence to serve as her “bridesmaids.”

Unlike McGraw, both Brooks and Lawrence were already established in the country music scene at the time. McGraw actually knew Lawrence, and said they “had been friends for a while.”

But McGraw didn’t know Brooks, and said he was “sort of in awe” of him and all of his success. It was a bit surreal for him to be serving as a bridesmaid alongside him in Rose’s wedding!

McGraw remembered a conversation he had with Brooks at the wedding. He wanted to let him know how much he appreciated him, because he felt he helped open doors for artists like him to make their way in country music:

McGraw said that Brooks’ response to his comments was “really profound” and it has stuck in his mind ever since:

“He goes, ‘Look, we all moved to town for that reason. I just got here first,'” McGraw remembered. “And I thought that that was really sweet of him to say that…“

Since serving as bridesmaids together at Rose’s wedding, McGraw, Brooks, and Lawrence have all become known as country music icons. How cool is it that these three singers have this shared experience to remember from early on in their careers?

Want to witness another blast from the past? Look below to check out Lawrence’s music video for “My Second Home.” A young McGraw makes an appearance in the clip!