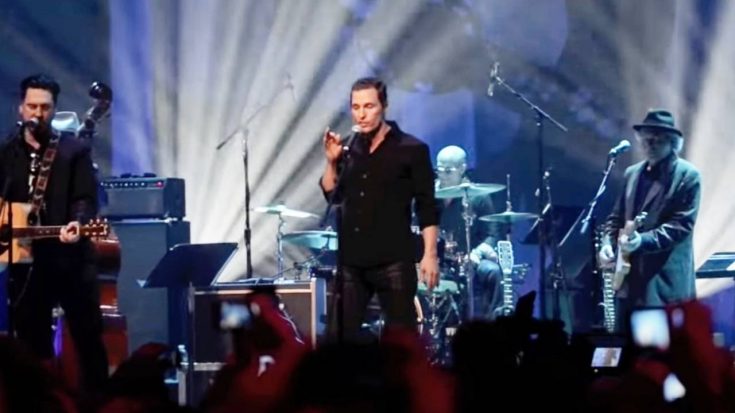 This should come as no surprise: Matthew McConaughey loves country music. He is a proud Texan and Texans love their country music! The actor is no different.

McConaughey has proven his love for the genre over and over again, like that time he and Snoop Dogg sang Willie Nelson’s “On The Road Again” during an episode of Carpool Karaoke.

Back in 2009, the actor explained just how far back his love for country music goes. He told a story about a time he and his brother went to a Dwight Yoakam show in 1987 and ended up taking a couple girls home thanks to a white lie involving George Strait. McConaughey thanked George Strait, who was in the audience, and had the whole crowd in stitches.

Fast forward a couple years, to 2012, McConaughey made an appearance at the music festival Austin City Limits, where he performed a couple Johnny Cash songs! He spoke/sang “Walk The Line”…

He also performed “When The Man Comes Around.” Both performances received mixed reviews online, with some saying he butchered the songs, but others didn’t care because of how good looking he is! We’ll let you be the judge.

See his “When The Man Comes Around” performance below.